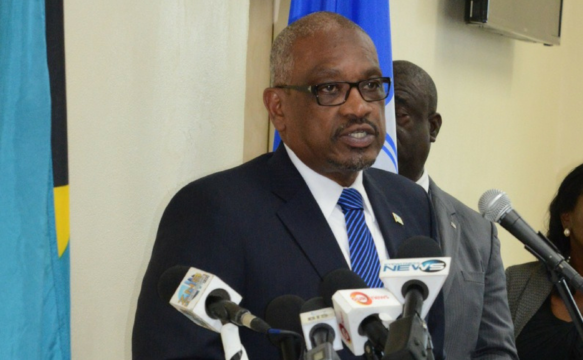 Just over a week after former non-resident ambassador to Panama C.A. Smith apologized over his “unintended breach of protocol” after a video of him announcing he was to become the next governor general made the rounds on social media, Prime Minister Dr. Hubert Minnis said yesterday that it was “unfortunate” that the conversation Smith had with staff luncheon was shared and did not remain private.

When asked if he had any concerns about the unintended breach, Minnis said, “It’s unfortunate in our society that you can’t have a conversation with staff or a private conversation (without) individuals recording it through social media and sending it viral or whatever.

“It is unfortunate that we have reached that degree within our society, but that’s a matter Buckingham will deal with.”

In a statement, Buckingham Palace stated that Dame Marguerite was received by the Queen yesterday upon “relinquishing her appointment as Governor General of the Commonwealth of The Bahamas”.

As it relates to the announcement, Minnis said, “There is a process. She would have gone over to visit Her Majesty, after which the Queen would; I would have sent forth a nomination for a replacement for Governor General, but that is not complete until that it confirmed by the Queen, after which they would send that correspondence back here. So, the whole process is really entrained right now.”

In the video, Smith advised the staff gathered that he had resigned as ambassador to Panama and five other countries, and did so to become governor general after Queen Elizabeth II appointed him.

He issued a public apology last Monday and acknowledged the breach of protocol.

He assured the public that his conversation with staff was a private discussion that he never intended to be made public.

He said, “I extend sincerest apologies to Governor General Her Excellency Dame Marguerite Pindling and to the Most Honorable Prime Minister Dr. Hubert Minnis and the government for any embarrassment or inconvenience resulting from this unintended breach of protocol.”

Smith was strongly criticized by the opposition over the viral video.

Calling the video a violation of protocols, Progressive Liberal Party (PLP) Leader Philip Brave Davis said he had not been consulted or informed by the prime minister as leader of the Her Majesty’s Loyal Opposition.

He also called the incident an insult to Dame Marguerite, who has served as governor general since July 8, 2014.