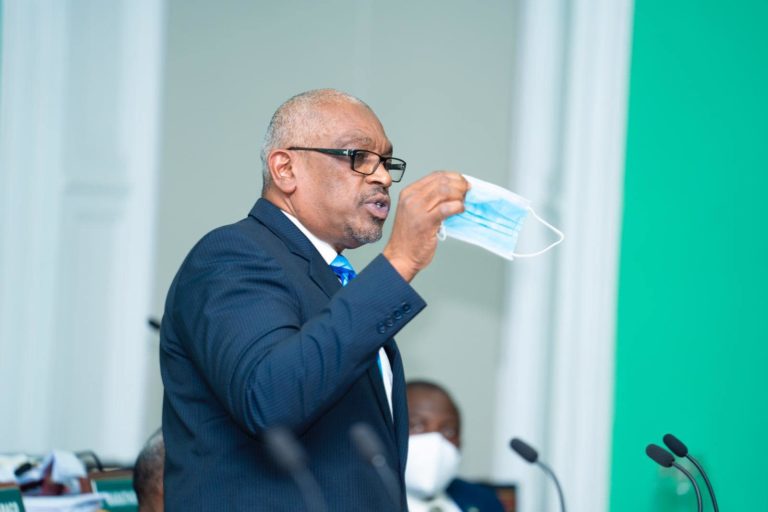 Prime Minister Dr Hubert Minnis in the House of Assembly.

NASSAU, BAHAMAS — Prime Minister Dr Hubert Minnis yesterday said it is possible for The Bahamas to face a third wave of COVID-19 infections, but it has the right “ammunition” to prevent that.

The prime minister stressed the best defense against the coronavirus is wearing a mask.

He made the statement during debate on a resolution to extend the state of emergency to October 31.

“We entered the global pandemic without ammunition,” Minnis said.

“The world knew not what to do.

“We were all fighting an invisible enemy and we had no ammunition.

“They were aggressively working on vaccines, which would permanent ammunition.

Quoting former US President the late John F Kennedy during his famous 1961 inaugural address, Minnis said Bahamians should ‘ask not what your country can do for you, ask what you can do for your country’ to mitigate a third wave.

“I say to you this is what you can do: by wearing this simple mask it is a shield against viral infection,” he said holding up a surgical face mask.

“It is an anti-viral scud missile. And in fact, some of the professionals today are saying that the mask is just as effective as the vaccine.

“Some of the most prominent professionals today are saying that this mask is just as effective, and in some cases more effective than a vaccine, and they recommend we use the anti-viral scud missile that I have in my hand.”

A scud missile is one of a series of tactical ballistic missiles developed by the Soviet Union during the Cold War.

Turning to House Speaker Halson Moultrie, Minnis said despite a COVID-19 case of a House of Assembly staffer, the speaker and House Chief Clerk David Forbes tested negative for the virus.

He attributed the outcome to their diligent wearing of facial masks during parliamentary proceedings.

Minnis said based on existing data, The Bahamas appears to be nearing the end of the second wave of cases.

The first wave, which spanned between mid-March and the end of June, saw 104 cases.

The country’s borders remain closed during that period and opened on July 1 to international commercial carriers.

As of yesterday, there were 3,618 cases in The Bahamas.

While the prime minister maintained he does not envision widespread lockdowns, as residents must learn to live with the virus, if particular communities experience exponential surges, the government could lockdown the area.

For example, Minnis said if there was a surge in the Gambier area or Mount Pleasant, the areas could be locked off.

He called these selective and not broad-based lockdowns.

The prime minister said other jurisdictions battling with new waves of the virus, have reinstituted lockdowns.

Minnis said the government does not enjoy lockdown measures and understands the challenges posed on residents and their mental health, businesses and ordinary life.

He said when cases increase, the government explores alternative measures, but it has to constantly find the right balance concerning the health, social and economic crises.

Further easing of restrictions was announced yesterday, including the resumption of commercial and social activities for 11 islands, excluding New Providence.

Minnis said he soon expects to make further announcements concerning travel and the need to quarantine.

He said the country’s aim should be to keep the infections down, but it cannot achieve zero cases.

“It’s not going to happen,” he acknowledged.

“Just like the flu is with us, it will be with us.”

All he does is repeat the same script that every other leader is doing worldwide as if we are not watching??‍♂️?