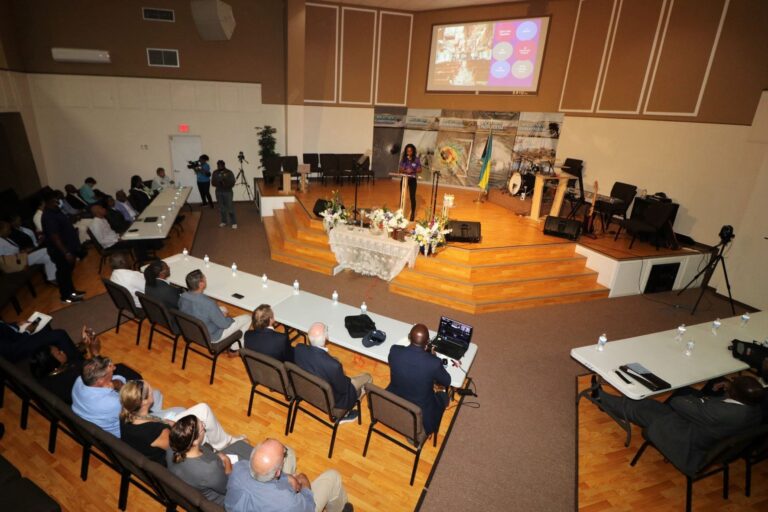 The Abaco Weather Symposium was staged in Dundas Town, Abaco on August 26.

He was addressing the Abaco Weather Symposium at the Friendship Tabernacle Church, in Dundas Town, on August 26, 2022.

“The people of Abaco and Grand Bahama know far better than I do, the trauma and destruction of a Category 5 hurricane,” Davis said.

“Apart from the extreme heat, the threat of annual hurricanes, along with rising sea levels, means we have to make vigorous efforts to prepare ourselves more effectively to deal with natural disasters.”

Davis noted that, during the prior week, The Bahamas hosted the first ever Caribbean regional conference, specifically focused on building a consensus for the United Nations negotiations on climate change.

“This was historic for many reasons, not least because our country has now firmly stepped up to take on an influential role in the global response to climate change,” he said.

“While issues of funding, carbon credits, and so on grabbing many of the headlines, for us here at home, climate change is already affecting our way of life,” he added.

“More so than ever before, we need to be prepared.”

“The data isn’t in as yet, but this summer must also be among the hottest,” he said.

He pointed out there was a serious possibility that from that point on, all may look back on those past two summers as the coolest.

“It is a sobering thought,” Davis said.

“But the mention of the name ‘Dorian’ gives us even greater pause for thought.”

Davis also spoke anecdotally of the effects of Hurricane Dorian on The Bahamas as a country, initiatives he introduced to address environmental issues of a small-island developing state (SIDS) like his country, as well as the importance of The Bahamas in the global environment.

He also noted that, in ancient times, symposia were characterized by the intellectual quality of the discussions.

“I pray that your conversations are conducted with the same rigor, passion, and urgency of ancient times,” he said.

Davis also extended a special welcome to Bryan Norcross and Max Mayfield, who, he said, would add an international dimension to the conversation.

“We are grateful for their many years of unpaid service to our island nation,” he said.

“I want to thank you for being a friend to The Bahamas,” he added.

“I want to thank Bishop Mills for bringing together this symposium; and I trust that when this is complete, you all would have been able to exchange ideas, and come up with solutions to some of the issues and challenges that we have.”

“Please note, that, in my Administration, you have a true and real partner.”