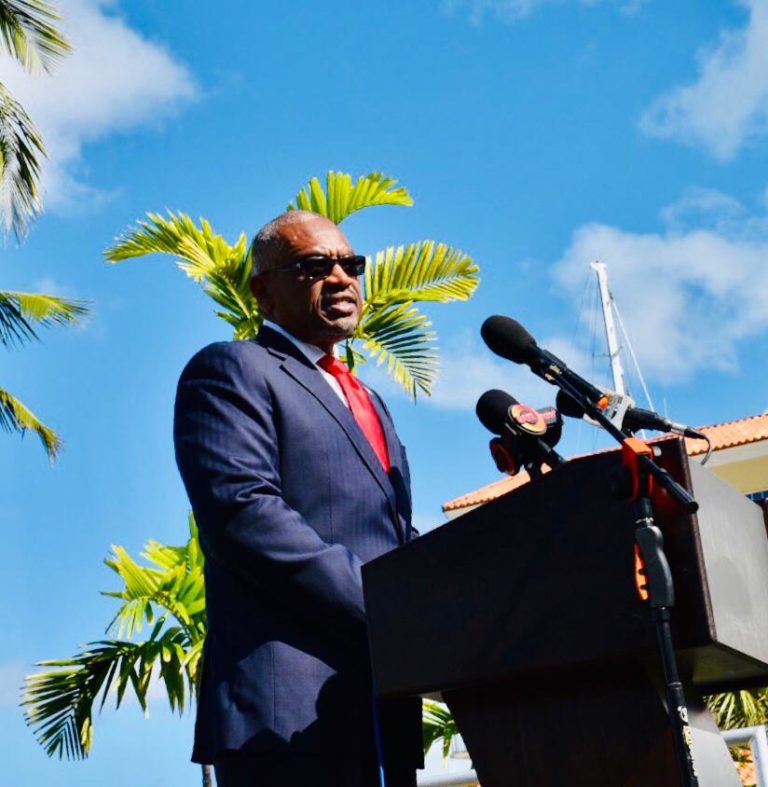 NASSAU, BAHAMAS – Prime Minister Dr. Hubert Minnis accepted a donation from the Royal Bank of Canada towards the redevelopment of the historic Southern Recreation Grounds – one of the projects under the Over-the-Hill Community Development Partnership Initiative.

The initial sum of $10,000 collected by RBC employees, who wanted to contribute to a local outreach community programme, was handed over to The Over-the-Hill Community Development Foundation.

The donation is said to be the forerunner to a larger donation that will be made over the course of approximately the next six months.  The donation will be earmarked for the green technology component of the Over-the-Hill revitalization programme.

During a ceremony held on the green spaces at the British Colonial Hilton, on Thursday, January 17, 2019 the Prime Minister thanked RBC for its corporate-sponsored initiatives especially geared toward the nation’s youth.

Following the ceremony, the Prime Minister, representatives from the Over the Hill Unit in the Office of the Prime Minister and RBC took in a site visit to the Southern Recreation Grounds where the redevelopment process was well underway.

The Prime Minister said that Over-the-Hill, where the Southern Recreation Grounds is located, is important to the cultural and historical landscape of New Providence.

“The Southern Recreation Grounds was one of the more accessible parks to the majority of our people who lived in the area south of Gregory Arch that we know as Over-the-Hill.

“It is always important to give some historical perspective, and to remind people, especially our young people, of the rich history and heritage of The Bahamas,” the Prime Minister said.

The Prime Minister recalled that it was on the Southern Recreation Grounds that so many Bahamians over many generations gathered for recreational purposes, to socialize and to play. Some also met under the silk cotton trees to discuss the issues of the day.

“The Southern Recreation Grounds became an important centre for the expression of a new political awakening which started in the forties.

“The bandstand became a platform for the national heroes, and the public speakers and thinkers of the new movement for change in the Colony,” he said.

Also, in 1942, thousands gathered at Southern Recreation Grounds for what was a very tense meeting with the representatives of the day during the Burma Road Riot.

In 1950, a new movement was launched at Southern Recreation Grounds by the Citizens Committee when the Old Guard refused to allow a showing of the movie “No Way Out”, which starred our own beloved Sidney Poitier.

During the General Strike of 1958, some of the public meetings were held at Southern Recreation Grounds.
It was there that the late former Prime Minister Sir Lynden Pindling led a very large crowd after the confrontation on Bay Street on Black Tuesday.  And it was there that many political rallies were held leading up to Majority Rule Day, which was celebrated on January 10.

“So the Southern Recreation Grounds was, perhaps, more than any other public gathering place the principal theatre for the continuing political and social drama of our times,” the Prime Minister said.

In restoring the Southern Recreation Grounds, we are revitalizing the Bahamian spirit and our collective memory.

Proposed for the Grounds are green spaces for picnics, cook-outs and concerts. There will be storyboards and signage recalling the history of the Grounds as a site of assembly for critical events in Bahamian history.
“The refurbished Grounds may serve as a classroom for students and young Bahamians on the history of the modern Bahamas, including the struggle for equality and freedom,” the Prime Minister said.

Additionally, the new Southern Recreation Grounds will include areas for fitness and health activities as well as outdoor and experiential educational activities.

The park will be redesigned to incorporate and allow better access to nearby facilities such as the Lillian Weir-Coakley Public Library.

“The new Southern Recreation Grounds will help to preserve our history.  These new Grounds will offer current and future generations a transformed space to renew and restore their minds, spirits and bodies in the heart of New Providence,” the Prime Minister said.

This article was written by Lindsay Thompson – Bahamas Information Services