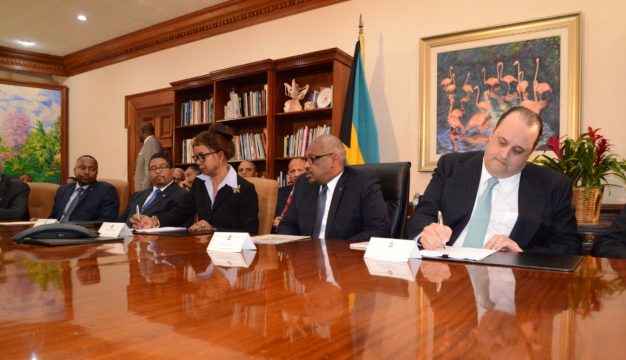 The request comes after it was discovered that Kreiger forged the signature of OBAN Energies President Satpal Dhunna. The prime minister has not yet addressed the controversy, which surfaced late last week.

Davis told Eyewitness News, that the country is entitled to implicitly rely on the word of a prime minister.

“In any other developed system of parliamentary democracy, this would be grounds to move a vote of no confidence.”

The original document was signed on February 19, at the Office of the Prime Minister. However, according to Press Secretary Anthony Newbold, that document was a ‘ceremonial’ agreement.

According to Davis, he and his parliamentary colleagues are concerned that the company is being used to push a political agenda.

As such, Davis said, his Progressive Liberal Party (PLP) sent a letter to accounting firm Ernst and Young, questioning its recent audits on opposition members, since the Minnis administration took office.

“If per chance the Free National Movement (FNM) government is engaged in a high-profile witch hunt in this instance, it is necessary that Ernst and Young is not seen or perceived to be facilitating such an exercise in any form or fashion,” he said.

Davis has called on the government to table the ‘ceremonial agreement’ tomorrow in the House of Assembly. He said, if the government chooses not to, it will be seen as taking matters into its own hands.

Davis said his party may call for a select house committee to further investigate the matter. If the government does not agree to that committee, he said, the other option would most likely be to call for a review by the public accounts committee.

“We are thinking of all the options,” he said.