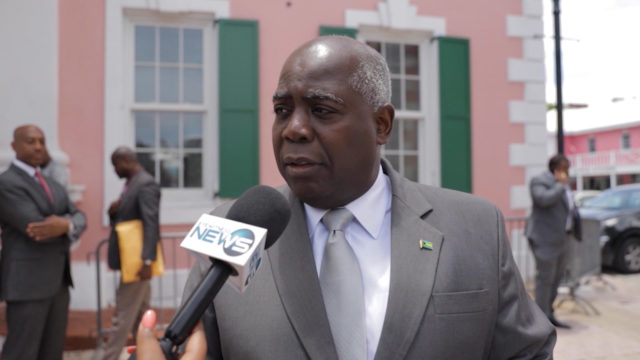 NASSAU, BAHAMAS – The Opposition Progressive Liberal Party  (PLP) on Sunday called on the prime minister to publicly state that the fatal shooting of a Royal Bahamas Defence Force Petty Officer was not an attack on the state.

The party’s head also noted that the incident has exposed weaknesses in safety and security at public institutions.

“Further, this attack raises serious questions about the protocols in place by the government regarding the emotional and psychological fitness of individuals who hold sensitive positions in the uniform branches of the government,” said PLP leader Philip Davis in a press statement issued last night.

Philip Perpall,52, an RBDF Petty Officer and Guard Commander at Government House was shot and killed early Sunday morning while on duty.

Police told the media that Governor General Her Excellency Dame Marguerite Pindling was not at Government House when Sunday’s shooting occurred.

Yesterday, the PLP leader said the minister of Foreign Affairs should – by now – have given assurances overseas about the ability to secure Government House, but there has been no word from that Ministry.

“Within 12 hours after the fact, the National Security Minister held a press conference in which more questions were raised than answered,” Davis claimed.

“How was it possible to breach the security of the nation’s highest valued property, with a weapon, kill an officer and for that individual to get clean away and depart the premises without being brought down?

“The Minister had no answer.

“Further, why with all the social media commentary that another Royal Bahamas Defence Force officer was involved, why couldn’t the minister confirm that?”

The PLP leader said he also wanted to draw the government’s attention to the recent fatal stabbing incident of a student, gang activity, and retaliatory fights in the public school system.

“The PLP will continue to monitor the government’s response to this particular incident, school policing protocols, and the unacceptably high levels of traffic accidents and fatalities,” Davis said.

Meanwhile, the PLP on Sunday offered its condolences to the family of the late Philip Perpall, the RBDF Officer who was fatally shot on the grounds of Government House early Sunday morning.

“Government House is the official residence of the Head of our nation – the Governor General of the Commonwealth of The Bahamas. This historical and monumental property should enjoy the highest level of security in the land. It is therefore troubling that this hallowed property became a crime scene this [Sunday] morning,” Armbrister said in an issued statement.

“This incident brings back painful memories for several Bahamians who have felt the negative effects of the crime epidemic within our country. Many Bahamians still recall the senseless killing of the aide to the Governor General some months ago and are beginning to question the quality of the safety measures surrounding the head of our commonwealth.”

The DNA deputy leader also extended condolences to the families, loved ones and friends of the victims of violent crime.

“Our thoughts and prayers are with them as well as the Royal Bahamas Defence Force, the Governor General and the staff at Government House during this dark moment,” Armbrister said.