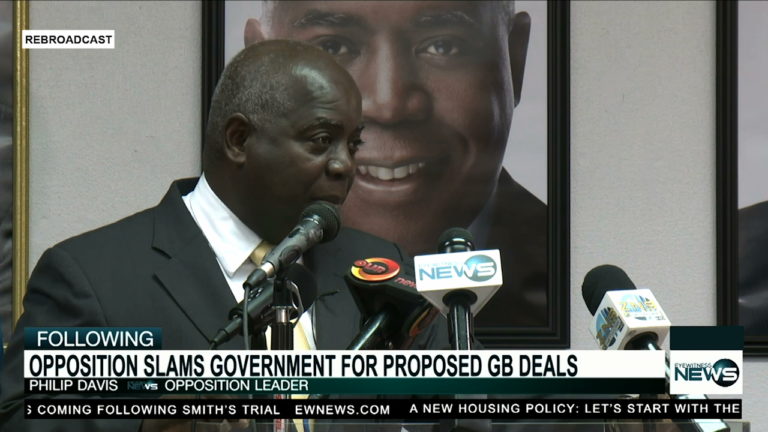 NASSAU, BAHAMAS – The Opposition Progressive Liberal Party (PLP) on Tuesday expressed their concerns about the government’s plans for Grand Bahama, claiming that many of their ideas are not new and were in fact stolen from the PLP.

Opposition leader Philip  Brave Davis also criticized the government’s negotiating tactics as it relates to the proposed Oban deal, stating that the government’s approach leaves much to be desired.

“He has probably had his Damascus moment by now and recognizes that the Oban affair, which he authored himself and which he misled Parliament on with impunity, is now ‘nonsense’ in his words,” Davis said.

The Minnis-led administration signed a controversial heads of agreement with Oban Energies on February 10, 2018, to develop a multibillion-dollar oil refinery and storage facility in East Grand Bahama.

While in Grand Bahama on Tuesday and pressed by reporters for an update on the deal, the prime minister refused to comment directly, stating that he was not in Grand Bahama to talk ‘nonsense’.

“Oban is not on the radar this morning. We are dealing with other issues this morning,” the prime minister said before heading to a cabinet meeting in the nation’s second city.

Davis said that it appears as if the government lacks perspective on the matters that they negotiate. He assured, however, that the PLP can help in a number of ways.

Davis also accused the government of flaunting old schemes to make them look new, and claimed that the government stole the PLP’s ideas of improving tourism and the economic climate in Grand Bahama.

“Some people don’t even have the grace to acknowledge other people’s ideas. This is a PLP project,” Davis said about the proposed plans of Carnival Cruise Lines to construct a grand port in East Grand Bahama.

“Now the Prime Minister took the whole cabinet up to Freeport and as far as we can tell, this [project] is still all conceptual in their minds.

“More promises, promises and no action.

“Meanwhile as the ministers are grinning from ear to ear, Grand Bahama continues to suffer,” Davis said, adding that the government’s efforts to improve the economy of Grand Bahama is still insufficient.

The PLP leader claimed that there are approximately five to six persons who migrate to Nassau from Grand Bahama on a weekly basis in search of an improved quality of life.

This article was written by Matthew Moxey – Eyewitness News Intern