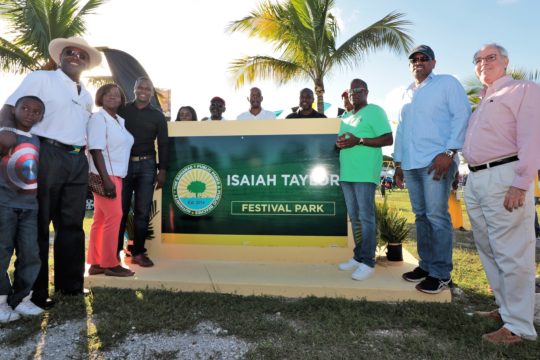 NASSAU, BAHAMAS –  ‘A lover of music, dance and culture’ were words to describe world-renowned musician Isaiah Taylor, during the renaming ceremony of Pinewood Park to Isaiah Taylor Festival Park on Saturday.

It was during the annual Dennis Dean Pinewood Festival that Prime Minister, Dr. Hubert Minnis declared that the park be renamed after the member of the Grammy Award Winning group, Baha Men.

“We not only honor and pay tribute to Isaiah because of his musical talents and for his many contributions to Bahamian arts and to Junkanoo; we also pay tribute to him as a Bahamian patriot, as a servant of his community, and as a mentor to young people,” Dr. Minnis said.

This ceremony comes on the heels of renaming of the Big Pond Park in honor of the late Edmund Moxey, who was hailed a visionary founder of Jumbey Village who was also in the vanguard of Majority Rule and Independence.

“This has been a wonderful week during which we are celebrating Bahamian musicians and artists,” he said.  “It is an honor to be here this afternoon for the renaming of Pinewood Park to the Isaiah Taylor Park.”

The prime minister observed that for a country the size of The Bahamas, it has produced a vast treasury of talent in the musical and visual arts namely: the late Tony McKay, Exuma, the Obeah Man — to the late Brent Malone, and young upcoming artists like Lavar Munroe, who has an exhibit at the National Art Gallery.

“We have to remember and celebrate the enormous talent of that flows in abundance from our Bahamian Imagination,” he urged.

He named Bert Williams, who was born in 1874 in Nassau, who left for the United States at a young age and became a Bahamian-American entertainer, one of the pre-eminent entertainers of the Vaudeville era and one of the most popular comedians for all audiences of his time.  He was also said to be by far the best-selling black recording artist before 1920.

Bert Williams was once described as: “one of the great comedians of the world”, the Prime Minister also noted.

Regarding Isaiah Taylor, Dr. Minnis also described him as another son of the soil and artist who showcased his talents and Bahamian spirit on the world stage.

“Isaiah Taylor is not only a proud son of The Bahamas.  He is also a proud son of Pinewood, who originally hailed from Simms, Long Island,” the prime minister said.

Isaiah Taylor grew up between Kemp Road and Bernard Road. And about four decades ago he became one of the first residents of Pinewood, a community he has been known to love with all his heart and soul.

“He has also been a patriarch of Pinewood. It is so wonderful that the community he loves, loves him back by honouring his contributions to Pinewood.  Generations to come will look at this Park, and ask, “Who was Isaiah Taylor?” he said.

Isaiah Taylor is revered as a Bahamian musical icon.  He is best known as the lead bass player and driving force behind the Grammy Award-winning group, Baha Men.

In acknowledging that he’s known Isaiah for many years, the Prime Minister said he has the spirit of Junkanoo in his soul.

Isaiah Taylor had self-taught the guitar at age 21, and subsequently joined the group High Voltage, the band known for bringing the sound of Junkanoo festival music to the popular music stage from the late 70s into the 90s. He also collaborated with Tyrone “Dr. Off” Fitzgerald, of Funky Nassau fame; Dr. Off was one of the pioneers who helped to shape the sounds of Junkanoo outside the traditional festival environment.

In 1992, High Voltage changed its name to Baha Men. And although membership has changed over the years, Isaiah Taylor’s mentorship and leadership kept the band together, leading to success and numerous awards.

Among their many accomplishments are several awards, including a Grammy Award in 2000, two Billboard Music Awards that same year and two Nickelodeon Kids Choice Awards in 2000 and 2002. Several of Baha Men’s songs have been used in several major motion pictures.

This article was contributed by Lindsay Thompson, BIS