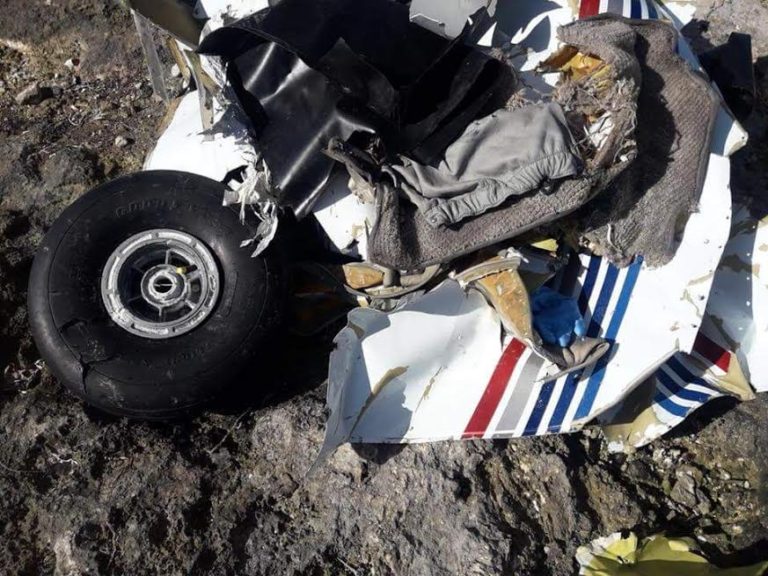 Debris from the small Aztec aircraft, which left North Andros Airport with one pilot and five passengers, including one minor, attempted to make what is believed to have been an emergency landing in Fresh Creek before it went down near Mastic Point back in January.

Pilot error is being blamed for the plane crash that claimed the lives of all six persons onboard in Mastic Point, Andros back on January 17, 2018, according to a recently released report.

The report issued by the Air Accident Investigation Department (AAID) yesterday, detailed a number of findings, including the fact that weather conditions on the day in question played a role in the accident, which was said to have occurred approximately four miles southeast of the Mastic Point settlement. 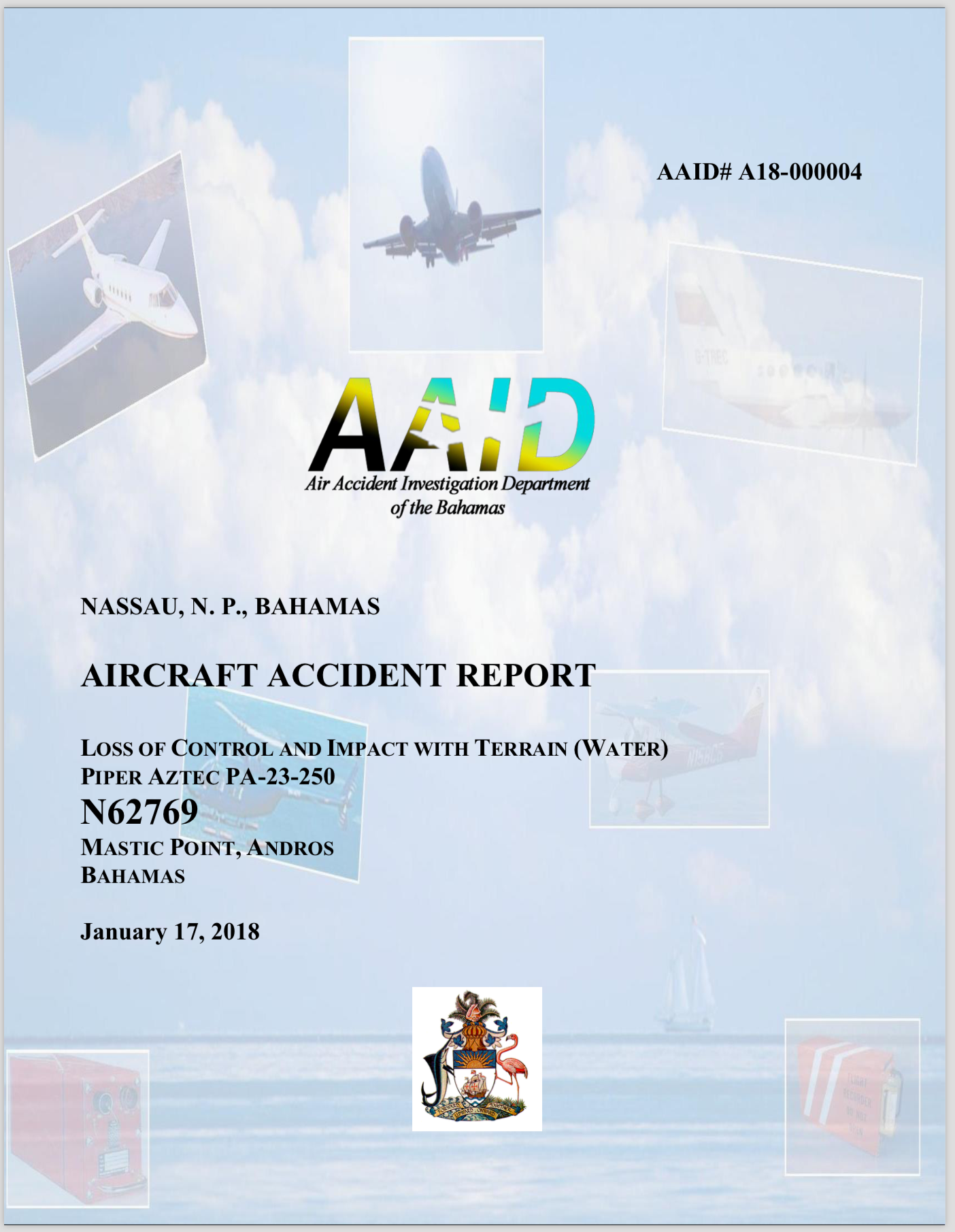 “The pilot failed to maintain control of the aircraft, possibly as a result of spatial disorientation and a lack of situational awareness when he continued flight into meteorological conditions he was not comfortable in,” the accident report concluded.

It also concluded that the pilot, Darren Clarke, 42, was “not qualified to fly this type aircraft by ‘instruments only'” and said the crash occurred in meteorological conditions legally requiring such qualification.

It further noted that the crash was “not survivable” due to the high speed and high angle contact with the ocean, and the magnitude of the deceleration forces.

The maintenance records, according to the report, indicated that the aircraft was equipped and maintained in accordance with existing regulations and approved procedures.

And despite the destruction of the aircraft by impact forces, the report said, it was determined that no pre-impact failure or system malfunction contributed to this accident.

Further, the report said, the pilot was not qualified or licensed to conduct commercial operations, as the pilot held a private pilot certificate issued by the Federal Aviation Administration in the United States of America (USA), with single engine land privileges.

Flight records recovered from the wreckage also showed that Clarke, had limited flight experience, having only logged 250 hours since 2014, around the minimum required to obtain a commercial license.

Margaret Adderley, 49, Carter Campbell, 52, Desiree Russell, 33, and her daughter, Destinique Wilson, 10, and Valentino Russell were all onboard the flight intended to land at New Providence.

Recovery divers were said to have retrieved some human remains from the debris field on 18 January, one day after the accident, the report said, pointing out that the remains were transported to the Rand Morgue at the Princess Margaret Hospital (PMH) for DNA analysis for victim identification purposes.

Postmortem examination could not be conducted on the pilot or passengers, as sufficient remains were never recovered. Remains recovered were sent to the Pathology Lab for DNA analysis for victim identification and all victims were eventually identified by DNA Analysis, the report said.

Air traffic control (ATC) confirmed that after issuing a transponder code to the pilot and his acknowledgment, and request for weather conditions, there was no further response from the aircraft. ATC also confirmed that the pilot did not indicate or reported any mechanical issues or irregularities with the aircraft, prior to his non-response and the aircraft appearing to return to the airport of departure, followed by a series of turns, orbits, unusual climb and descent patterns.

As a result of the investigation, the AAID recommended in its report that the Bahamas Civil Aviation Authority (BCAA) increase its surveillance and oversight of the general aviation sector, and put in place policies to reduce the high incidence of unauthorized commercial operations.

AAID also recommend a plan of action be instituted to ensure all airmen (as applicable), who are owners or operators of foreign registered aircraft, are in possession of Bahamas issued license as required by Bahamas Civil Aviation General Regulations (CAGR), 2017.

It has also recommend increased surveillance to ensure all airmen who are owners/operators of foreign registered aircraft, they are in possession of required medical certificates while operating those foreign-registered aircraft in the Bahamas airspace.

Additionally, knowledge and skill testing applicable to flying in Bahamian airspace was also recommended as a requirement for any applicant requesting a Bahamas License.

The BCAA, the report said, has satisfactorily addressed these recommendations, among others, as it has specifically proposed an aggressive plan to address the unauthorized commercial operations being conducted.