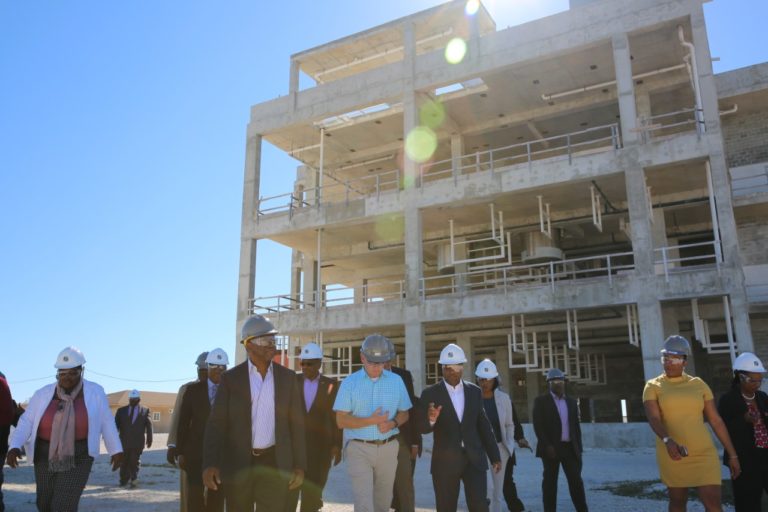 A tour of the new construction was given to Prime Minister, Dr. the Hon. Hubert Minnis, on Friday, March 16, when he, accompanied by parliamentary colleagues and staff of the Office of the Prime Minister, toured PharmaChem’s $180 million expansion project. (BIS Photo/Andrew Miller)

Prime Minister Dr. Hubert Minnis said yesterday he was “impressed” with PharmaChem Technologies and is eager to see what the plant will produce in the future.

PharmaChem currently produces the active ingredient of a particular drug that treats over one million HIV patients. An additional two drugs will be added to its roster thanks to the expansion.

This, Dr. Minnis said, is significant in that in no time, he is sure The Bahamas will be providing drugs to over two million people.

Greeted by Pietro Stefanutti, president, and Randy S. Thompson, chief executive officer, the prime minister and his delegation toured the facility over the weekend.

During the tour, Dr. Minnis noted the emphasis placed on safety, to the extent of having an ambulance on site.

“That would also help with the changes that we’ve done at the Rand Memorial Hospital. When we did renovations there, we took into consideration the possibility of any accidents in such a facility, we can deal with it appropriately,” he said.

Fortunately, he added, none have occurred thus far and with their safety level, there may be none.

According to Dr. Minnis, the $180 million expansion shows PharmaChem’s confidence in the Bahamian economy, which would add about 80 additional Bahamian staff members. The company currently has 71 Bahamians employed, with 60 being full time.

“We’re very impressed with what we see here and we will continue to do all we can as a government to ensure that there is a smooth running of construction and expansion of the facility,” he said.

“That will help us in terms of employment and moving forward.”

Dr. Minnis noted, “As small as we are, we’re making great contributions to health care throughout the world and I’d like to congratulate the staff members of PharmaChem and encourage them to continue the excellent work that they’re doing.”