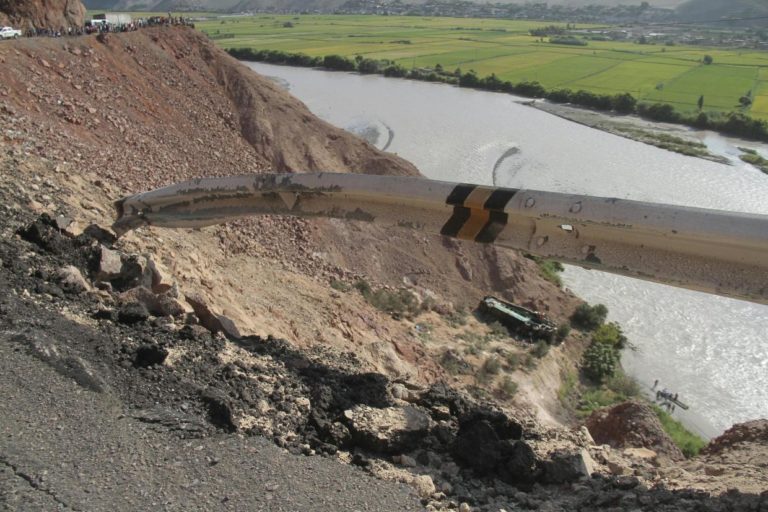 A photo of the crash site taken from the top of the ravine. (AFP/Getty Images)

At least 44 people have died in Peru after a bus careened off a highway into a ravine.

The bus hurtled about 100 meters into the ravine in the mountainous souther portion of the country, marking the second major bus crash in the country this year.

The deaths were announced by a local official, according to Reuters.

“According to a report from the Peruvian National Police, there are 44 confirmed deaths as of now,” Yamila Osorio, the governor of the Arequipa region where the crash occurred, said on Twitter.

It is unclear exactly how many people were on the bus, and an official estimate places the ridership at 45. But, officials have warned, that number may be low since additional passengers could have boarded the bus along the route even though they were not on the bus’ original register.

The tragic accident follows just over a month after a crash in early January when 48 people were killed on a bus that collided with a truck. That truck then drove off of a clip near Pasamayo on the Pacific coast of the country.

Wednesday’s tragedy occurred on a curve of the Panamericana Sur highway. Roads in Panama have frequent accidents, since the infrastructure is considered unsafe, and because bus drivers generally lack training.

“My condolences to the relatives of the victims of the transit accident in Arequipa,” President Pedro Pablo Kuczynski tweeted. “We have taken all steps to provide immediate rescue support and transfer victims to the closest health centers so they can be attended immediately.”

Photos of the crash showed the bus on its side at the bottom of the rocky incline leading back up to the road. The bus appeared to have stopped just short of a river nearby.

This article was written by Clark Mindock, The Independent