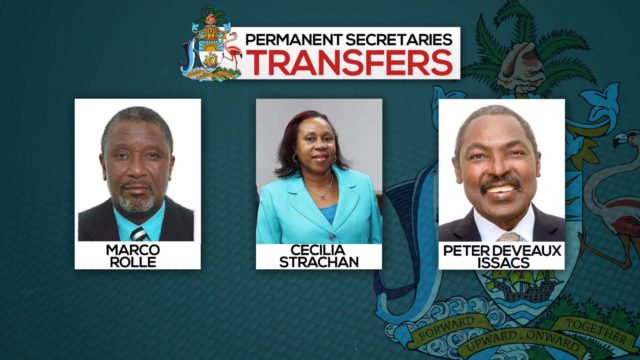 NASSAU, BAHAMAS – The Cabinet Office of The Bahamas announced on Thursday that the Prime Minister has advised Her Excellency the Governor General to effect the transfer of three Permanent Secretaries.

Mr. Marco Rolle, Permanent Secretary in the Office of the Attorney General and Ministry of Legal Affairs will be transferred to the Ministry of Health.

Ms. Cecilia Strachan, Permanent Secretary in the Ministry of Labour will be transferred to the Office of the Attorney General and Ministry of Legal Affairs.

“Prime Minister Dr. Hubert Minnis acknowledges and thanks the Permanent Secretaries for their contributions in their former posts and looks forward to the work they will do in their new assignments,” the Cabinet statement concluded.