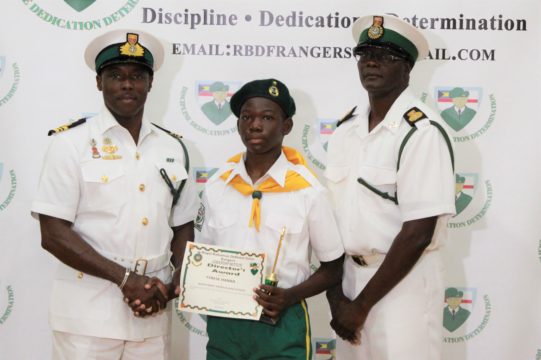 Enthusiastic parents and loved ones showed their appreciation with loud applause for 71 students who graduated from the Royal Bahamas Defence Force’s (RBDF) Rangers recruit training program in Grand Bahama on Saturday past.

Bringing remarks on behalf of Commodore Bethel for the occasion was Lieutenant Commander Johnson, the commanding officer of the RBDF Freeport Base. He congratulated the newly installed Cadets, and encouraged them to take advantage of the many opportunities afforded them through the program.

“The training curriculum for the Rangers program prepares and exposes cadets to opportunities in the Defence Force, as well as the commercial maritime sector and the public and private sectors,” said Lieutenant Commander Johnson. “Providing fundamental training in civic, religious and business- through Junior Achievement, gives Rangers the foundation to become productive citizens of the the Commonwealth of The Bahamas, and global citizens to function at entry level jobs both locally and abroad.”

Approximately 1,500 students comprise the Rangers program, which has been in existence on the island of Grand Bahamas since 2010. The young Cadets who recently graduated, represented 14 schools on the island. Numerous relatives and friends were there to cheer on and congratulate the students.