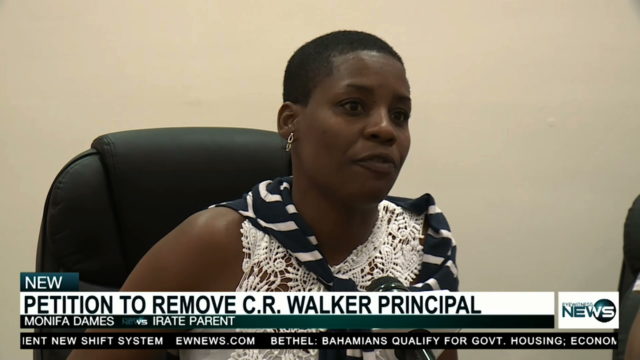 What started off as a regular 12th grade year for Carleil Moss at the C.R. Walker Senior High School quickly turned sour within the first month as Carleil’s parents, Monifa Dames and Carlton Moss have claimed that their daughter was reportedly refused a prefect position because her skirt was too short.

Carleil’s mother Monifa Dames explained that this was a matter that could have been easily resolved, had they been contacted, but she was not happy about the constant alleged victimization of her child.

“I’m very appalled that Mrs. Trevor Culmer [the Senior Mistress] kept bullying her and embarrassing her in the front of faculty and in the front of students,” Dames alleged. “I told Mrs. McKay [the principal] that I was very disappointed in her professionalism.”

According to Moss, he had explained to the Senior Mistress that his daughter does not live with him, and he sees her on weekends, but he is also responsible for her uniform so he told her to give him until the weekend to rectify the issue and she reportedly agreed.

The father further claimed, however, that Carleil was still repeatedly called in before the leniency time had expired. He said that he wrote a letter to the school requesting that Culmer cease and desist with the alleged victimization of his daughter and in response was called in for a meeting.

He said that the meeting got heated and ended abruptly, but he alleged that he was physically assaulted by McKay and later filed an assault charge. He said that police officers reportedly tried to bribe him to drop the charge.

“His first question to me was what can we do to make this assault charge go away,” Moss claimed. “I said, ‘sir I’m surprised you would ask me a question like that’”. He further went on to ask me to drop the charges if my daughter was made a prefect at the school.

“I said sir this assault charge is non-negotiable. We have witnesses to verify the assault happened [and] our daughter is deserving of becoming a prefect. I was not going to negotiate an assault charge with my daughter’s assignment as a prefect,’ he said.

The irate father also mentioned that he wrote to the District Superintendent, Anderson about the matter but she never got back to him. He said that Anderson instead held a meeting with McKay, Culmer and his father [Carleil’s grandfather].

“They told him that his son is causing problems at CR Walker and they expect him to muzzle me and they don’t want this incident to go public. They want him to keep me quiet,” he claimed.

Moss said that he is going to do whatever it takes to protect his daughter, even if it means going to the full extent to have the matter dealt with. Both parents said that they have already sat down and prepared their daughter for all that is to come, and they are prepared to protect her and bring justice at all cost.

Dames also added that she is disappointed in the Ministry of Education and their disregard to look into the situation. She said she is calling on the Minister to get involved.

Please give me a call and send me a link so that I can sign the petition. My contact is 809-2749 Sherece Riley.