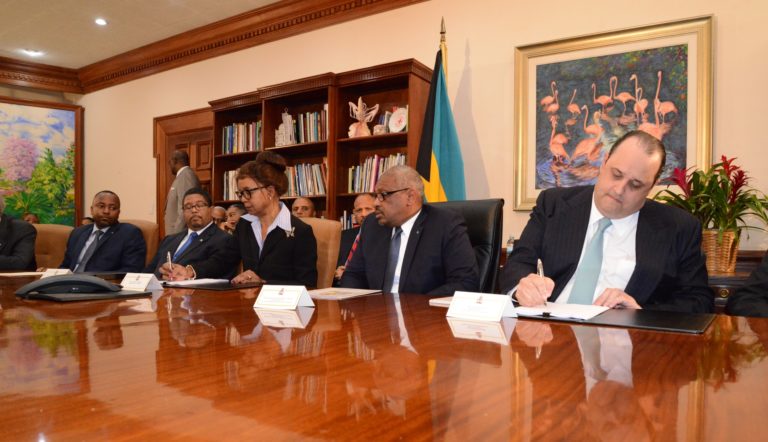 Secretary to the Cabinet Camille Johnson (center), on behalf of the Bahamas government, and Peter Krieger (right) of Oban Energies, at the Office of the Prime Minister February 19. Krieger is accused of forging OBAN Energies President Satpal Dhunna's signature on the heads of agreement shown. (BIS PHOTO/PETER RAMSAY)

NASSAU, BAHAMAS — While talk of the $5.5 billion Oban oil refinery project has been quelled in recent times, a Cabinet minister yesterday referred to the controversy as a “clumsy execution of a ceremonial signing” and a “rookie mistake”, but shot down suggestions of impropriety.

Agriculture and Marine Resources Minister Michael Pintard, while delivering his contribution to the 2020/2021 budget, said: “The bottom line is, Oban is the clumsy execution of a ceremonial signing; a signing that was done according to law but a simulation of it, that is a reproduction of it, was clumsy.

“I don’t know what all my colleagues think about it, but I think it was as clumsy signing; a rookie mistake.

“Was there a concoction? Nonsense; absolute nonsense.”

The government signed the agreement with Oban in February 2018 for a $5.5 billion oil refinery and storage facility project in East Grand Bahama, doing so in the absence of an environmental impact assessment (EIA). Controversy erupted after it was revealed that Peter Krieger, the company’s non-executive chairman at the time, signed the heads of agreement (HOA) during what was dubbed as a “ceremonial” event, using the name of OBAN Energies President Satpal Dhunna instead of his own.

Prime Minister Dr Hubert Minnis later explained during a communication in Parliament that Dhunna had signed the actual HOA just over a week prior to the ceremonial signing as he had to leave the country to attend to other business. That HOA was subsequently signed by the secretary to the Cabinet.

In a March 2018 address, the prime minister said: “We accept that we should have clearly indicated on the 19th February, 2018, that it was a ceremonial signing.

“It should be noted that it is not unusual for a heads of agreement to be signed before a ceremonial signing so as to ensure that there is a firm agreement between the various parties.

“It is unfortunate that at the ceremonial signing, Mr Peter Krieger wrote the name of Satpal Dhunna, whose name was printed under the signature line in the space provided for the signature of Mr Dhunna. He should have noted that he was signing on behalf of Mr Dhunna and signed his name as the authorized representative of the K Family Irrevocable Trust on the ceremonial document.”

The government subsequently appointed a Cabinet subcommittee and technical advisory group as it sought extensive changes be made to the existing HOA.