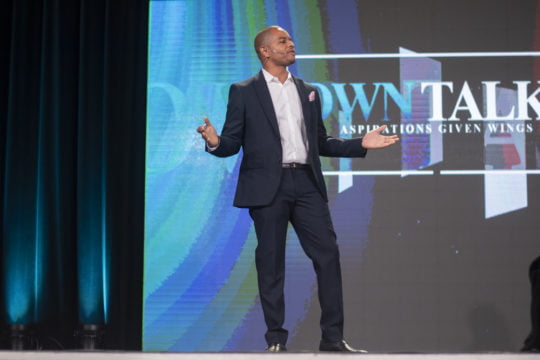 NASSAU, BAHAMAS – Sebas Bastian, founder of OWN Bahamas, revealed to hundreds of OWN Talks event attendees on Thursday night that one of his companies – Investar Securities Limited – will begin offering Bahamians, from every walk of life, the opportunity to buy into two separate mutual investment funds, beginning June 3rd, 2019.

OWN Talks is an annual self-empowerment series launched by OWN Bahamas three years ago, which is aimed at introducing Bahamians to a forum where successful international business owners provide free access to information relative to business ownership and management.

The first lecture series for 2019 was held at the Baha Mar Convention Centre on Thursday night.

Acknowledging that he wanted to ‘pass the baton of opportunity to give others a chance,’ Bastian  told guests that he wants to place wealth in the hands of all Bahamians, as he officially announced the launch of the Titan Investment Fund.

“This fund will allow every Bahamian access to the shares in Island Luck, the government rental building, and many other exciting investment opportunities in our portfolio,” Bastian told a packed room of guests.

According to Bastian, the Titan Balanced Fund is designed to be accessible for everyday Bahamians, requiring a minimum investment of only $500.

“Starting June 3, you can buy your shares at Investar Securites, Cash&Go and Green Leaf Financial Services,” Bastian said, adding that salary deductions will also be made available for all government employees.

“I Sebastian Johann Don Edwin Bastian believe in economic democracy and I want to put wealth within reach of All Bahamians in our country,” Bastian said.

And while the announcement came at the OWN Talks event last night, a press conference held by Investar Directors yesterday afternoon, provided media with detailed information about the intricacies of the mutual fund and how the company expects to spread wealth nationwide.

Investar Securities Limited, a financial services institution, which was incorporated nearly four years ago, is regulated by The Securities Commission of The Bahamas and is licensed as a Financial Services Provider.

Investar directors revealed Thursday the introduction of Titan Funds, “an investment opportunity which is designed to put wealth within reach for Bahamians.”

The Titan Balanced Fund and the Titan Fixed Income Fund, which are expected to launch in early June, will appeal to different markets, according to Watson.

“In both funds all investments will be in Bahamian dollars and in Bahamian entities,” Watson said.

“In both funds high yield performance and long-term contribution to national development will be the hallmark in which selections are made.”

“In both funds the goal is to increase value for each shareholder, rather than just simply paying out dividends.”

The Titan Balanced Fund offers shares at $5.00 dollars with a minimum investment of $500.00 dollars, which Watson said makes it attractive to first-time Bahamian investors and the average Bahamian.

The Titan Fixed Income Fund offers shares at $10.00 dollars, with a minimum investment of $1, 000.00 dollars, which is geared toward the corporate investor, according to Watson.

“Both are aimed at producing greatest yield to participants but the Titan Balanced Fund will invest in Playtech Systems Limited, the parent company of Island Luck; which means that for the first time, those who have watched the success of Island Luck, will have the opportunity to participate in that success,” Watson shared.

While some critics asserted that the creation of the investment funds was a roundabout way for Island Luck to circumvent introducing an Initial Public Offering (IPO) of shares on its own; Dirk Simmons, Director of Titan Fund explained that the assertion is misguided.

“These funds, and the structure we have taken to invest these through an investment vehicle, has nothing to do with an IPO,” he explained.

“What’s happened here is that we are trying to make investment opportunities more accessible to the average Bahamian person and we have chosen to do that through these investment vehicles.

“There is no backdooring of anything here.”

The Titan Funds will be listed on The Bahamas International Securities Exchange (BISX), according to Titan Fund directors.

Only Bahamian citizens and residents with exchange control status can invest in the fund.

Investar directors said they are confident that due to the affordability of the shares; the new offerings will hold their own in an already competitive market.

There are no dividends to be collected from any investment, according to Titan directors.

Meanwhile, Bastian told guests  at last night’s OWN Talks event that success should never be measured by the amount of money that a person has in the bank, but how it is used to impact the lives of others.

Bastian said the OWN Talks Foundation is growing to meet the needs of entrepreneurs at every level – persons who are seeking to turn their ideas into reality and empowering them through ownership.

“It is no longer acceptable for the quality of life of the average Bahamian to be put on hold, hoping that a Sol Kerzner, Sarkis or the Chinese shows up to save the day. We may not realize it, but there’s is a storm sitting over the Bahamas and that storm is called hurricane technology,” Bastian said.

“To fight this storm, it’s going to take more than just having a computer and wifi, and what we need to do is address the national skills gap in the country, begin to create a digital economy and say goodbye to traditional ways we try to grow it.”

Bastian told guests that they must place themselves in an environment that can expose them to things that they do not know exist.

“Expose yourself so you can diversify your income, because Warren Buffet once said if you don’t find a way to make money while you sleep, you’ll work until you die,” Bastian said.