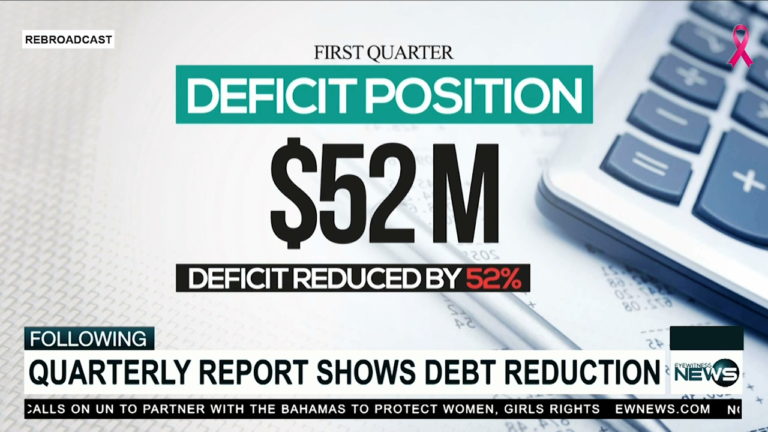 Referring to the move as an “historic first” in The Bahamas, which represents a new and unprecedented standard of transparency in public figures, the Government on Tuesday released its first quarterly report on budget performance.

The quarterly report outlines that positive trends emerge as the Government’s deficit position improves, but the Ministry of Finance still cautioned that the government must remain focused as much work remains to be done.

Nonetheless, Peter Turnquest, Deputy Prime Minister and Minister of Finance said Government is cautiously optimistic that it will remain on track to meet its fiscal targets.

“We are encouraged about where we are today,” Turnquest said. “The numbers do not reflect the true position because there are some special circumstances that government has given with respect to hotels and contracts that have been ongoing, so we will see the full effect in the next quarter and the quarter after that.”

According to the report, the country’s overall deficit was reduced by 52 per cent.

Numbers fell from a little over $100 million for the same period last year to $52 million this year.

The government also celebrated its revenue increase which jumped by 13 per cent.

Revenue for the first quarter for the 2018/19 fiscal period is pegged at 513.8 million dollars – which represents a $60.1 million dollar increase from last year.

“We have to allow the legal system to work its way out and the negotiations are continuing with respect to the gaming houses and hopefully we can come to a mutually beneficial resolution shortly,” Turnquest shared.

Expenditure increased by $3.5 million dollars – due in part to payments made to settle a portion of the government’s budgeted arrears.

While expenditure inflated, Turnquest was happy to note that arrears were seemingly sliced.

“We’ve been able to pay off 21 per cent of arrears that we projected that we would pay this year and that is progress because as we pay off those arrears we will be able to fulfill our commitment to the Bahamian people; in terms of being able to reinvest not only in micro, small and medium-sized enterprises and entrepreneurial development, but also in infrastructural development so that we create the environment for further growth of the economy and empower Bahamians to be entrepreneurs.”

Turnquest opined that the report demonstrates that the government is on a positive path.

“We recognize that there is a sacrifice and we recognize that we are asking a lot, but we are hoping that the report issued today will demonstrate to Bahamians that we are being faithful to our promises and that things are in fact beginning to work so that at the end of our fiscal consolidation period in three years we will be able to put ourselves in a much stronger position,” Turnquest noted.

The Ministry of Finance plans on publishing a quarterly report on budget performance within four weeks after the end of each quarter, and it will include information about government’s revenue performance, expenditure developments, debt activity and policy initiatives for enhanced public financial management.