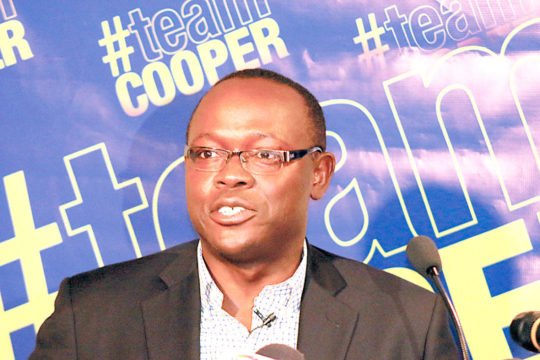 Opposition Member of Parliament (MP) For Exuma and Ragged Island Chester Cooper on Monday questioned whether government is still confident about the $5.5 billion Oban Energies deal for East Grand Bahama, in light of the many recent pronouncements by Cabinet ministers that government can get out of the deal if it pleases.

In a statement last evening, the Progressive Liberal Party (PLP) MP pointed out that two Cabinet ministers have publicly stated, “without prompting”, that the government has a way out of the Oban Energies Heads of Agreement (HOA) it signed with the company in February.

Last week, Central Grand Bahama MP Iram Lewis told Eyewitness News that if the government was not pleased with the outcome of the environmental impact assessment (EIA), which is said to be currently underway, that it would cancel the deal.

“Notwithstanding that these assurances come from the government essentially two months after the heads of agreement was completed and the subsequent deafening public uproar, it is remarkable to see as senior a member of Cabinet as the Attorney General, tell the public in Parliament that the government can essentially coerce a developer into “packing up” and going “so long, bye-bye”,” Cooper said.

“It is clear to see that the government has no such right to exit the Oban heads of agreement, based on any environmental impact assessment. The deputy prime minister’s refusal to accept what appears in the government’s poorly constructed agreement, is more than a little troubling.

“It is also amazing that the deputy prime minister, the representative for East Grand Bahama, has now found his voice many weeks after the deal was signed and all the revelations of questionable actors and actions involved in and surrounding this deal have come to light.”

Cooper went on to question in his statement where the deputy prime minister’s voice, and certainty about the government’s ability to get out of this deal was, when the government was grilled during the mid-year budget debate in the House of Assembly (HOA) about its “sheer folly and clumsy handling of this important matter?”

“The statements by Bethel are very serious,” he said.

“I cannot recall another time in history when an Attorney General has openly opined on how to get out of a deal the administration they are a part of just signed with a foreign investor. While I do not support the Oban Energies project in its current form, it is imperative that the government of The Bahamas be clear as to its intention in having numerous Cabinet ministers speak to getting out of the heads of agreement it just recently signed.”

He said the government must state clearly if it has “lost faith” in Oban and if it intends not to move forward with this project.

He went on to state that if the Minnis administration plans on ending this “badly conceived” Oban deal, “it should just say that and do so through the proper legal channels, and with much more transparency and due diligence than it lunged headlong into it.”

“We re-iterate that Oban is a bad deal and the government must act with dispatch in extricating the Bahamian people from it,” he said.