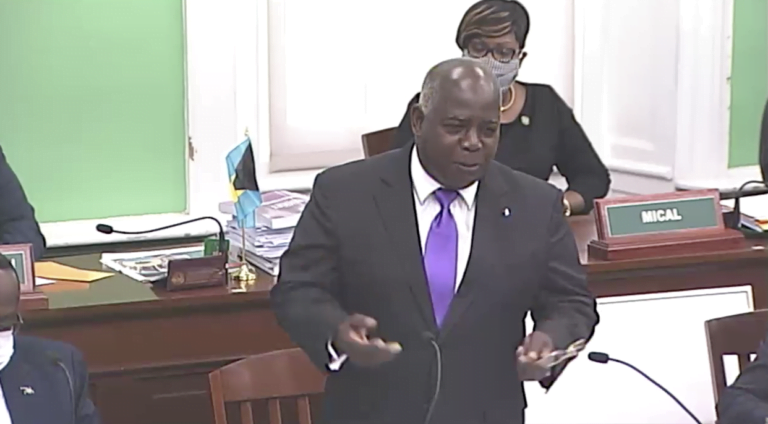 NASSAU, BAHAMAS — Opposition Leader Philip Brave Davis said yesterday that “no self-respecting parliamentarian” should support an extension of the public state of emergency to November 30.

Davis maintained the opposition’s stance against the resolution during debate in the House of Assembly yesterday.

Davis said: “Mr Speaker, we do not support an extension of this emergency order. Bahamians are suffering. We are in a health crisis. We are in an economic crisis and we are suffering from a leadership crisis. That too, with lack of trust in this government spreading faster than this terrible virus, and now we have an administrative crisis to contend with as well.”

According to Davis, the government has “utterly failed” to contain the spread of the virus in The Bahamas – an assertion that was strongly rejected by governing members.

He said while the official opposition supported the initial public state of emergency, the government has “squandered” the period.

He called on the government to provide evidence to support the continued need for an extension.

“The government’s COVID policies are a failure,” Davis said.

“They have imposed harsh restrictions on the people of this country, they have taken a wrecking ball to our local economy, and at the same time they have utterly failed to contain the virus.”

Leading debate, Minister of Foreign Affairs Darren Henfield said the emergency orders are not intended to “concentrate power” in the hands of the competent authority, but to give the Cabinet an opportunity to manage the deadly virus on the advice of medical experts.

The minister also said the measures exist to empower the government to act quickly to save lives.

He said the government’s objective with respect to the orders is to only put in place “necessary restrictions”, and introduce area-specific restrictions in direct response to increases in cases.

Additionally, Golden Gates MP Michael Foulkes insisted the government continues to make decisions in the interest of the Bahamian people.

Foulkes said Davis would understand the need for the orders if he attended high-level meetings with stakeholders that he was invited to.

Davis underscored the surge of cases in The Bahamas since the first wave, which spanned from mid-March to the end of June.

“We now have 132 deaths, from the 1st of July to date; with 26 of those deaths still not classified.

“Is that progress? I ask the Bahamian people.”

The case fatality rate (CFR) in The Bahamas stands at two percent, in line with global standards.

Acknowledging the government’s continued call for unity in the fight against the virus, Davis said there must be a willingness for a unified approach.

“Find out who is the unwilling party in the unity for which you call for, that’s all I ask,” he said.

Davis said The Bahamas records more cases every few days than Barbados has recorded during the outbreak thus far.

Three cases were confirmed this week, including two female visitors, and a Barbadian man, who returned to the country on October 18.

The country has seven confirmed deaths, representing a CFR of three percent.

You know his sons selling drugs n guns right….ad well as the police and other government sons and daughters…. Open ya eyes bahamas