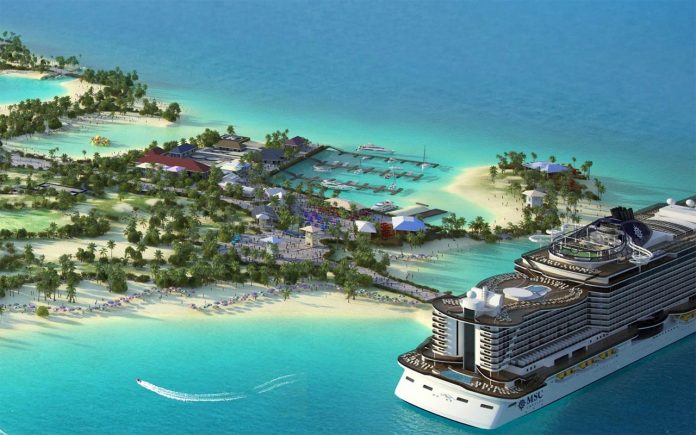 A rendering of the proposed Ocean Cay development. (PHOTO: CRUISEADVICE.COM)

It is simply shocking that the government would even consider allowing Carnival Cruise Lines to take possession of, and ban everyone but its passengers from visiting yet another one of our beautiful islands. The practice of cruise companies establishing ‘private islands’ is an abomination on every level – environmental, economic, ethical – and should never have been allowed to take place in the first place.

There are already six such island around the Bahamas, once beautiful, secluded environmental sanctuaries ruined by huge plastic slides and cheap, gaudy buildings; trampled by thousands of feet on a weekly basis; the precious wildlife turned into entertainment for cruise ship guests or killed off by pollution from the ships.

Environmentalists say East End one of the most fragile and important ecological areas in the Bahamas. And according to international experts, the threats involved are very real. During every cruise, enormous amounts of untreated human waste, chlorinated water from pools, toilets and spas, waste from onboard medical facilities, are dumped into our waters. This is apparently perfectly legal as long as the ship is three miles from land. But this kills fish and other marine life in huge amounts and also suffocates reef systems by lowering the level of oxygen in the sea.

Cruise ships are also responsible for significant air pollution from the dirty fuel they burn, which can lead to serious health problems. Even while at dock, cruise ships  run their diesel engines to provide electrical power to passengers and crew. According to the American EPA, every day an average cruise ship emits more toxic gas than 13 million cars and more soot than 1 million cars. Is this really good for the Bahamas? What will this mean for East End in the long run?

But Carnival has refused to even discuss environmentalists’ concerns. According to news reports, a spokesperson said: “There is no finalized deal at this time. If/when a deal is finalized, we’d be happy to discuss specifics of the project.”

No discussion about environmental safety until AFTER the deal is done? This is typically smug response from one of these cruise companies, which often adopt the attitude that we need them more than they need us.

But is this really the case? While they are putting our precious environment at risk, the cruise companies are also sucking the money out of our economy. These private islands are staffed by cruise employees, the shops, bars and restaurants all belong to the cruise companies – in other words, all of the money goes in to their pockets and is shipped out of the country. Nothing for Bahamians. They are effectively methods of bypassing the Bahamian population while getting rich off of our natural resources.

I urge this FNM government, who promised that it would be the people’s time, to cancel this terrible deal with Carnival. I urge them also to reexamine their policy of cruise ship dumping in our waters, and conduct a close environmental review of the impact on each and every private cruise island in the Bahamas. Minister Romi Ferreira, were he not in office, would be right there among those opposing this deal. It is time for him to step up and fulfill his mandate.