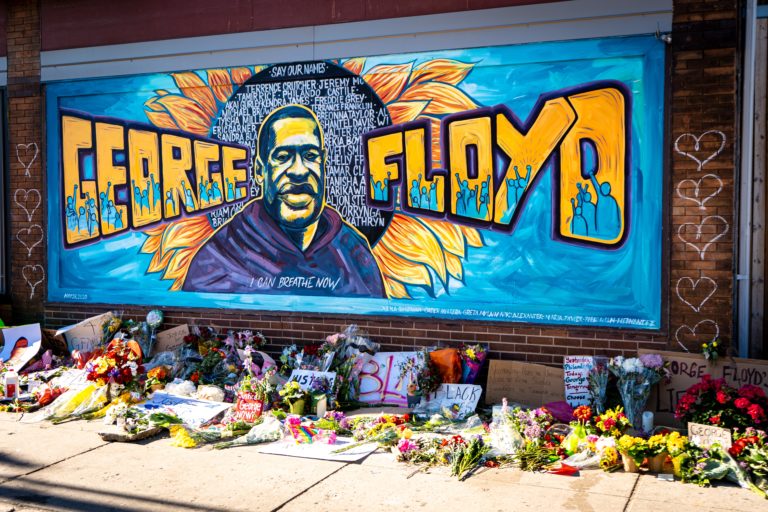 A graffiti mural honoring George Floyd, who was shot and killed by American police in Minneapolis on May 25. His death has sparked a series of nationwide protests and riots against police brutality and racism.

By Sir Hilary Beckles, Vice-Chancellor of The UWI, President of Universities Caribbean, and Chairman of the CARICOM Reparations Commission

Martin Luther King Jr, when he felt he could not breathe came to Jamaica. When the threats to his life were constant and closing in around his neck, he took this measure to maintain his life. His visits to Jamaica’s north coast filled his lungs with the ‘freer’ air of our space. He returned to the mainland more battle ready for the struggle to achieve the God-given right to the dignity of black life.

Island and mainland have always been a common survival space. Borders cannot contain consciousness nor isolate the intellect. Martin was retracing the footsteps of Marcus, his mentor, the incomparable Mosiah Garvey who also travelled from this north coast—his ancestral home—to Harlem, there to dedicate his life to the struggle for the dignity of black life.

Garvey’s Jamaican voice was heard in every American community where the dignity of black life was denied. He would have flown to the side of George Floyd, and embraced his forlorn family while preparing to prosecute those who demeaned his dignity and denied his ‘livity’.

Marley, the Buffalo Soldier from this said north coast, was idolised by every African American who was empowered by ‘old Marcus Garvey’ to get up and stand up and defend their right to life with dignity.

Malcolm, socialised as an X West Indian, took up the struggle of the islands on the mainland, connecting the legacies of Marcus and Martin to the West Indian commitment to rightness, fairness, and dignity in plantation America.

Where there were plantation overseers there are now police officers. Through them, black life remains prime for deletion as if on the plantation.

West Indians have been in it all along. Professor Orlando Patterson, Harvard don, but bred and adorned at the Mona Campus of The UWI, told his MSNBC interviewer that what we have seen is a special breed of evil from the depth of hell. We must exorcise it, he said, and return it from whence it came.

Patterson spoke as a Caribbean scholar in America, the finest sociologist they have, on loan from us to them. His classic work, The Sociology of Slavery, shows us how history can haunt communities; how privileges from the past become the pain of the present.

From that horrible history when Europeans stole 15 million of our ancestors from Africa and scattered them across plantation America—the Caribbean getting the lion’s share—shattering family bonds, the future was cast in the concrete again, in which the face of George was crushed.

From that moment, when the British government in 1636, took the first step to legally classify all blacks in their colonies as non-human, chattel, property, and real estate and proceeded with their European partners to build and manage with it a global business model for 400 years, the greatest ‘financial juggernaut’ of world history, humanity was poisoned with the toxic pandemic of race hatred.

And from that date in 1783, when Chief Justice Mansfield of England, in the Zong Trial, boldly proclaimed that the blacks in the case before him are no different from so many horses, sheep, and goats, the poison had permeated every community in the western world.

It is this culture of centuries upon which the American nation is built that continues to choke the air from black lungs. The Americans won their national independence from Britain, and proceeded to retain slavery as the development model of the nation; the same model in which the western world defined and treated black people as animals. It is the legacy of this model, embedded in a national security institution that took the life of “Big Floyd”.

It is this licence to treat animal life as dispensable that led the pack of hunters to pin a citizen to the concrete, using the knee like a blunt knife to the throat for nine minutes, while posing and posturing like a fisherman in triumph over his catch of the day for all to see!

It is this cultural triumphalism of killing black prey that has caught afire the heart of a hitherto race hardened world made to participate virtually in an actual live extinction of life; typified by a dying man calling out for his deceased mother who at the moment answered her son because she knew it was time to call him home.

The UWI, too, has heard the call of George. We wish to invoke the memory of Marcus and Martin to bring to the islands young African Americans, here to breathe before returning to the mainland fight for dignity. We owe it to Martin, to Marcus, to Malcolm, and to Marley; and to all the ruptured minds of Minneapolis.

This is our cause. Every university that stands for freedom, justice, and the celebration of human dignity must stand up like a gorilla for justice for George. Minneapolis is just another place where our eyes have detected evil, beyond hate, that has erupted from the depth of hell.

Not only the souls of black folks have been scared forever by this latest event in the genocidal war against young black men; the soul of the world is awakened.

This week, every person on the planet who carries a spirit of love for humanity has become a protesting priest. We need our prophets now more than ever. The ‘old pirate has robbed I’ once again. And yet we shall rise!

Professor Sir Hilary Beckles, 8th Vice-Chancellor of The University of the West Indies (The UWI) is a distinguished academic, international thought leader, United Nations committee official, and global public activist in the field of social justice and minority empowerment. He is also the President of Universities Caribbean.