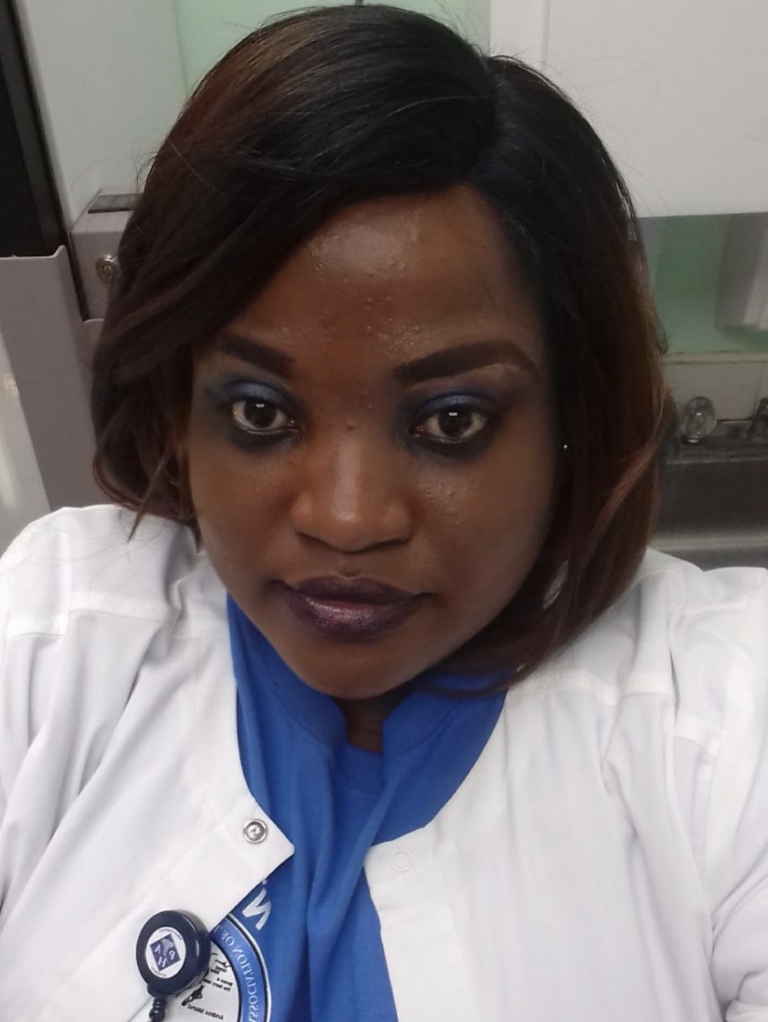 NASSAU, BAHAMAS — Under a hospital tent and lying in a bed with over 60 liters of oxygen being pumped into her lungs as she struggled to breathe, Accident and Emergency Nurse Adrianne Scott said she felt her life slipping away and eventually let go.

“I almost died; I almost lost my life,” she said in an interview with Eyewitness News.

Scott, 43, has treated scores of infected patients, some of whom have passed away from the virus.

She received her first jab of the AstraZeneca COVID-19 vaccine on August 19.

But she did not realize at the time that she already had been exposed to the virus after treating several patients at the hospital who later tested positive.

Within a 48-hour period, Scott said what she thought were side effects of the vaccine — such as a fever and body pains — progressed and her condition deteriorated as she became diaphoretic.

After five days of severe symptoms, Scott got tested for COVID-19 and the result was positive.

She received medication and returned home “armed [so] that I could beat this”.

But her condition failed to improve and as each breath became more labored, she called the hospital once again.

“I didn’t sleep. I got up in the morning and I was pouring sweat.

“I called my boss and she told me to come in.”

She was fearful of being admitted as a patient where she worked, knowing the conditions of the hospital, which has been overwhelmed with infected cases, and the limited resources and beds available, but Scott said she felt she “had no choice”.

She drove herself to the hospital, not wanting to put her family and friends at risk.

In the hospital, she was placed in isolation in the general practice clinic where other COVID patients were admitted — an area she described as cold and lonely, and “felt like the grave”.

Her treatment began, and she was placed on 15 liters of oxygen, but her cough became persistent and uncontrollable.

The two tanks of oxygen that rested by her bed became her lifeline.

“But I couldn’t sleep because I was afraid the oxygen would run out, and there was no way to get comfortable; the cough was shaking my whole body and I couldn’t lie down. I could only sit up and cough, and cry and groan,” she said.

As relatives video called her, Scott put on a brave face and assured them she was okay.

She knew it was a lie, telling Eyewitness News: “I knew, as a nurse, that I was dying.”

When her daughter, a 21-year-old college student in the United States, called, Scott said her skin color was gray and despite the fear on her daughter’s face, she told her she would be okay — words Scott admitted she did not believe.

“At that point in time, I was at the end of myself,” she said.

“I had fought the COVID at home, so I was already tired.

“I wasn’t eating. When I lost my taste and smell, which helps shape your reality, food became repugnant to me. You have no desire to eat.

“The only thing you try to do is drink. My urine became the color of dark tea.

“My lips [began] to peel. I was dehydrated and I was losing the battle.”

Her oxygen was upped to the highest amount available in the hospital as her fever elevated.

Concerned that she may not last the night, hospital staff transferred her via ambulance to the hospital tent where high-flow oxygen was available.

Under the tent, there were nine other severe COVID-19 patients.

Only three of them, including Scott, survived.

The bed she received was the last available.

After another round of medication and an IV drip, Scott threw up uncontrollably.

“I was deathly afraid. I knew that was it. I crawled back up to my bed and I gave up,” she said.

“I let go of this life. I had no choice. I had no more strength; I was weak mentally.

“I worked in the emergency room for three and a half years. I am no stranger to death nor sickness. I see every gunshot, every car accident…but I was the patient now, and there is a difference and psychological thing.

“I was just waiting, waiting to die…and I struggled to breathe.”

Scott said the woman in the bed to the right of her, who groaned all night in pain, passed away the following morning.

She watched as nurses wrapped her up and the porters collected her.

“I laid there all night and listened to the people groan and cry,” she said.

“I was crying and I was afraid because the woman had been on that high-flow oxygen all night, and it didn’t work for her. So, how do I know it’s going to work for me and [I] watched her die?”

Another woman adjacent to Scott, who was on a ventilator, crashed hours later and died.

It would not be the last death.

Four more COVID patients, including a retired nurse and a hotelier whom Scott had previously worked with before becoming a nurse, also died under the tent.

Scott said as porters collected the body of the hotelier, a mother of three, her phone rang.

She said the woman had been texting her family just hours before.

“I said: ‘God, you have to get me out of here,’” Scott said, recalling envisioning her death.

“I saw my death and I was in a room with people dead, past and present.

“I was stripped of myself and I came to the end of myself, and I had a spiritual encounter.

“I was naked and my humanity fell off me, and everything fell to the ground and I was before God, and he showed me who I was…”

Scott said she felt the hand of God and she determined “with every fiber of her being” that she would walk out of the hospital.

She said she believed a combination of the COVID treatment Remdesivir, her partial vaccination and God helped saved her.

Devoid of human touch for days, she asked her family to deliver some fresh fruit, which she forced herself to eat.

Scott said she set a goal each day to lower her oxygen consumption, to sit up, and to eventually brush her own teeth.

She spent a total of 12 days in hospital and was eventually released on September 9.

She admitted that due to past traumas, she had lost her faith in God, but her experience renewed that faith and it has changed her life.

“I left there reborn with a whole new perspective,” she said.

Now, Scott is still unable to speak for long or walk too far without running out of breath,

But she said as soon as she is able, she will return to work, recognizing her duty as a nurse.

Scott thanked the nurses, doctors and other personnel at the hospital who continue to risk their lives every day as part of their duty and jobs.

She plans to get her second vaccine jab as soon as possible.

What is the standard treatment protocol at PMH? 19months and no one can tell you. What drug cocktails are they using?

The treatment protocol is Azithromycin 500 mg then 250 mg once daily. With Vitamin C, D &E. Also patients that are hypoxic ( low oxygen saturation) with severe disease, they get supplemental oxygen and also dexamethasone and remdesivir. Some patients require nebulizarkon with Ventolin and all patients get anticoagulated with clexane to prevent life threatening blood clots . Additionally patients are positioned prune and encourage to use incentive spirometry . I wonder who you asked previously. Here lies the problem, asking the wrong people. The protocol aforementioned is Gold standard around the world with clinical data to support efficacy.

Glad she made it through, but why did she wait so long to get the vaccine??? She could have been double vaccinated by then, and probably only mildly ill…

Just like everyone else nurses are human with fears like everyone else. Despite her not being vaccinated she offered herself up on the front line to care for those who need care. The issue is not whether she had 1 shot or no shot but rather knowing the danger she was willing to serve. As a Nurse some of you are so ungrateful it pains me

She is the epitome of a hero. Thanks for your sacrifice in the midst of this pandemic. God’s grace and mercy be upon you always.🙏🙏🙏🙏❤️🌹

God is great, I pray she fully recover soon. Nurse Scott I wish you all the best.

Looks like she was describing known side effects of using Remdesivire (a drug that was too toxic to be ethically usefull for previous infections like Zika or Ebola). Renal and/or total organ failure are KNOWN side effects of the drug. Hydroxychloriquine and Ivermectin are abd have been used since 40 years prior to this outbreak with a safety profile better than Tylenol. But, those two (HCQ IVM) are in the public domain and can’t be patented….while Remdesivire is about 3-6 hundred a vile and you may need about 5 of them (meanwhile not a vitamin or essential nutrient is apart of the protocol).

Wow! I am inspired by your account vividly described. This shows that there is sooo much more God has in store for you. Thanks for sharing your story to encourage me & other.

Well told, Royston. I felt her fear and pain… what a terrifying ordeal for this woman, and all Covid patients, I’m sure.

Thank you. Nurse Scott is a true warrior, and I’m grateful she trusted her story with us.

Nurse Scott is a credit to the hospital. Not only do they work so hard to save others they are putting their own lives at risk for very low pay worldwide. It is a true vocation, not just a job and what these nurses do is so admirable. I am so glad you came through, I wish you the best for a happy fulfilling future.

Keeping you in prayer Nurse Scott as you return to your optimal health. Thank you for sharing your story and experience as a Covid-19 survivor. Nurses risk their lives daily to care for their patients. Their sacrifices are great, they are the true heroes in the midst of this pandemic. So many of us on the front line have been affected by this deadly virus and have paid the ultimate price. No amount of money can ever pay our nurses for their love of this noble profession that they have chosen as a career. It is our calling for we are God’s Angel 😇 on earth. We Care. We love what we do. Get well soon Adrienne. ❤️🙏🙏🙏