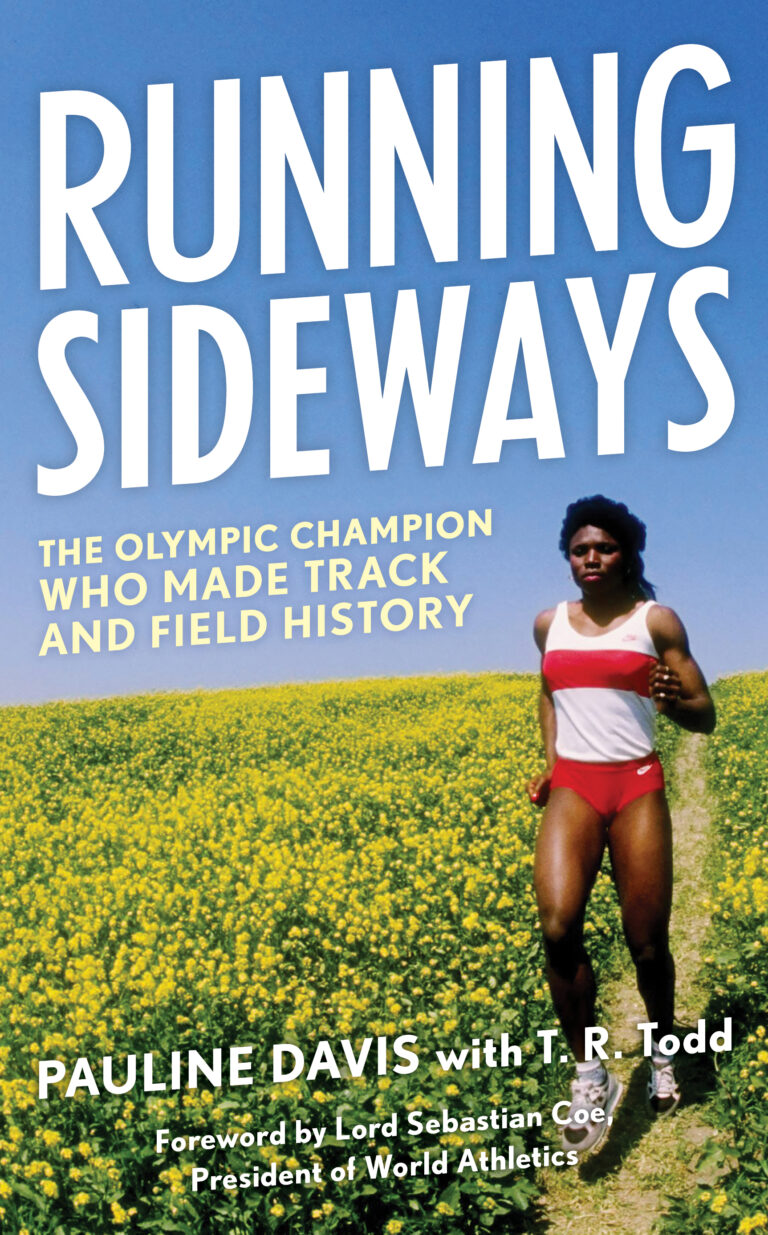 The cover of Golden Girl Pauline Davis’ memoir “Running Sideways: The Olympic Champion Who Made Track and Field History”, set to be released in early 2022.

NASSAU, BAHAMAS — If Bahamians are looking for heroes, they don’t have to look very far. Just Over-the-Hill, a girl with grit started running sideways, usually barefoot, carrying buckets of water from a public pump and looking over her shoulder to stay steps ahead of the boys who chased and frightened her. Sometimes she beat them back by running straight up a palm tree.

Her name was Pauline Davis.

She ran so hard and so fast and so consistently, she ran her way right to the top of track and field.

Now, in a new book with award-winning author TR Todd (“Pigs of Paradise”, “The Man Behind the Bow Tie”), the fearless competitor tells her story, revealing fears, excitement and the cruelty and just a whole lot of bad luck piled on top of good.

The book is called “Running Sideways: The Olympic Champion Who Made Track and Field History”.

The foreword is by Lord Sebastian Coe, an Olympic champion himself and, since 2015, president of the World Athletics Association. He calls Davis’ achievements — competing in five Olympics, sprinting to gold twice in the 2000 Olympics in Sydney, Australia, once in the 200m individual and with the Golden Girls 4 x 100m — Herculean, given the path she trod to get there.

Publisher’s Weekly praised the book and the story it tells of a young runner who had to save her shoes for school and church, who went on to become a two-time Olympic gold medalist, the first to win individual gold in sprinting in the region and the first woman of color to serve on the World Athletics Council.

There is such depth to the character who is Davis, tough as nails and soft as lamb’s wool, that all Todd had to do was tell the story of her life honestly. It is a story worthy of a movie script, a big-screen, full-feature film that millions around the world of every age will relate to — and dream of doing the brave and courageous thing.

At 55, and still in excellent condition, Davis is retired from competitive running and from the Ministry of Tourism, where she worked as a brand ambassador for 20 years.

“Pauline Davis is a brilliant example of Bahamian excellence and perseverance,” wrote Kravitz this week.

The entertainment superstar joins a long list of all-star endorsements from those in the track and field community, including four-time Olympic gold medalist Michael Johnson from the United States; two-time Olympic champion and former world record holder in the 100 meter Donovan Bailey from Canada; and two-time silver medalist Juliet Cuthbert-Flynn from Jamaica.

Published by Rowman & Littlefield, the book is now available on Amazon and the publisher’s website.

Books will soon be available at local stores here in The Bahamas, with a special book signing event planned for March 8 at Goodman’s Bay.