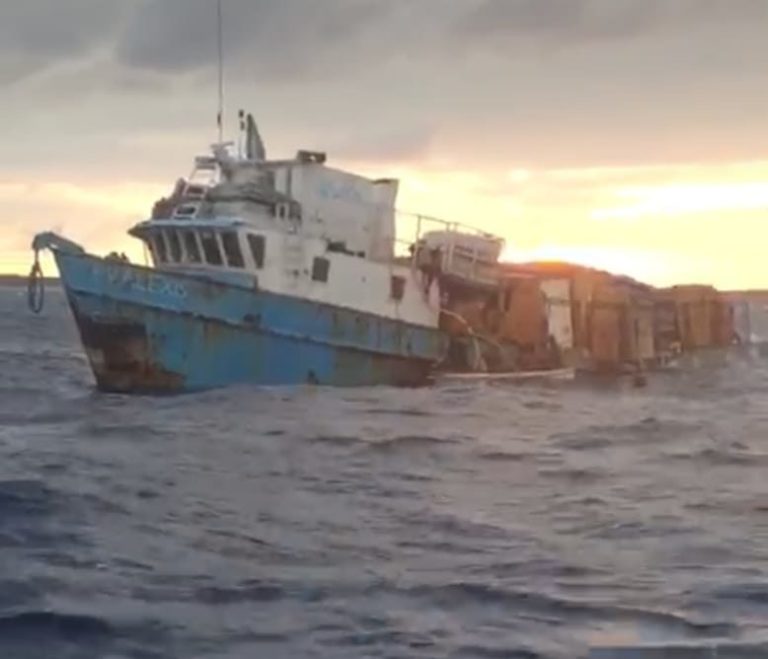 NASSAU, BAHAMAS — Health officials have conducted coronavirus (COVID-19) testing on two Haitian men who swam ashore to Millers, Long Island after the freighter they were on exploded on Friday morning.

The vessel was among three to leave from Potters Cay Dock on Monday en route to Haiti.

On Thursday, the first vessel, an 80 ft steel hull known as the MV Fish Farmer caught on fire due to an explosion in the engine room around 3 pm, according to Long Island MP Adrian Gibson in a Facebook post.

That freighter was destroyed by the blaze.

Reports indicated that there were nine persons onboard the MV Fish Farmer – six men and three women.

Gibson explained that the two men – aged 50 and 30 – told police that during their journey from New Providence, a woman traveling onboard and purportedly suffering from a previous non-COVID related illness, experienced worsening conditions and died.

They said after the vessel caught on fire, the remaining eight persons on the ship began swimming.

The two men told police that the six other members of the group got separated due to the shifting tides sometime around 2am. The said they swam eight to 10 miles before they finally reached shore.

The six people remain missing and the deceased body was left onboard the vessel, according to reports.

Gibson advised health personnel on the island tested the two men at the police holding facility in Simms.

He said the samples were flown to Nassau and have been submitted for “urgent testing” with the results expected to be known today.

The Long Island MP also reported yesterday that another one of the Haitian vessels started taking on water and sank just one mile off of the wreck of the first vessel as it continued to make its journey to Haiti.

Eyewitness News understands that this occurred around the same time the first vessel exploded.

Gibson said the crew onboard that ship embarked onto the third vessel and are all still en route to Haiti.

He said a three person team of police officers were dispatched to Long Island on Saturday to assist police on the island with the investigation.