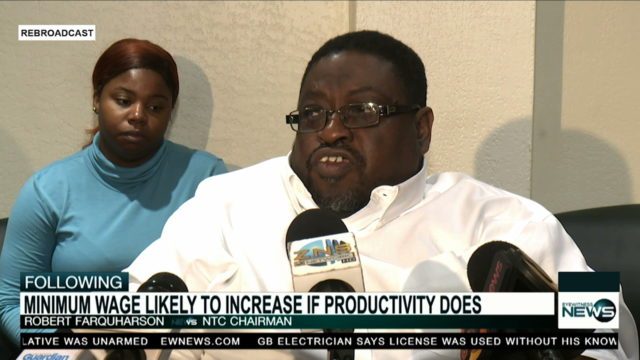 NASSAU, BAHAMAS – There is a possibility that the minimum wage, which is a mere $210, can increase according to National Tripartite Council (NTC) Chairman Robert Farquharson.

In keeping with the government’s mandate to transform the industrial relations environment of the nation, the NTC, along with other industry partners on Thursday launched a public relations campaign for the proposed national productivity legislation.

The campaign is expected to take place over the next five months.

Farquharson said if the minimum wage of $210 is to rise, there must be a consultation process and increased productivity must take precedence.

“The conversation of minimum wage will have to be done through the same process of national consultation,” Farquharson said.

“I am of the view that in order for us to really look at increasing that [minimum wage] now, we need to look at it from the angle of increasing productivity in The Bahamas.

“So, once we increase the level of productivity in The Bahamas, then it should be a direct impact on the level of return on investments. It will only be then when workers will have a strong argument to increase that minimum wage and raise their quality of life and standard of living.”

According to the NTC, the goal of this consultation period is to gather feedback from public and private stakeholders to not only define productivity, but to determine its impact on society and the economy.

However, according to Edison Sumner, the CEO of Sumner Strategic Partners, this initiative stems from alarming feedback from global investors who believe The Bahamas’ productivity rates are not up to par, which results in foreign intervention.

“We are hearing too often, for example, when foreign investors are coming in, that there are requests for labour certificates to bring people into the country because they claim they could not find the skillsets that they needed to fill certain roles they needed to be filled,” Sumner said.

“We want to now mitigate those kinds of situations and we want to show the world that we can compete on a global stage.

“We want to compete against our brothers and sisters in the region, and we certainly want to show that we can compete against the best in the world. And one way we can do that is to show others that The Bahamas as a country, are able to produce at the level as anyone else in the world.”

Cecilia Strachan, permanent secretary at the Ministry of Labour believes that the NPC will have a direct impact on increasing the productivity levels in the public and private sectors, making the Bahamian economy more competitive.

The Ministry of Labour and the representatives of the NTC extend an invitation to labour organziations, the business community, and other NGOs to get involved in the process and participate in the public consultation. They believe that it is the best way for the public entity to give solid and well-considered recommendations to the government.