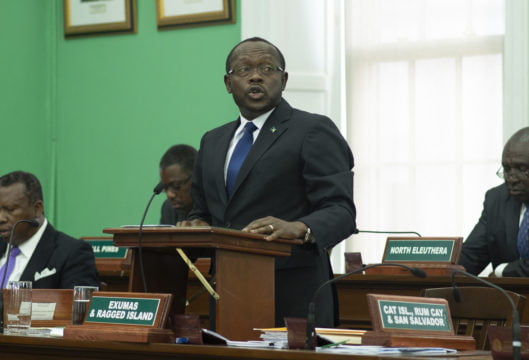 NASSAU, BAHAMAS — The COVID-19 crisis requires a comprehensive response and the government can not do it alone, Opposition Deputy Leader Chester Cooper said yesterday as he unveiled a response plan calling for COVID Bonds, international borrowing, austerity measures on the part of government and fast tracking public private partnerships.

During a National Progressive Institute meeting held via Zoom, Cooper unveiled the plan of recommendations which he said had been formulated by some of the country’s brightest minds, not considering political affiliations.

The Exuma and Ragged Island MP said: “A comprehensive response to this threat is required. The government can not do it alone. They must work hand in hand with the Central Bank, the commercial banks, the business community and civil society.

“We anticipate that there is going to be unemployment exceeding 30 per cent, probably in the region of 50 per cent in the short term. The deficit for the year 2020 we anticipate will exceed $1 billion. We expect that public debt over the next 12-18 months is going to increase.”

Cooper continued: “There are two ways to raise revenue for this stimulus. One is increasing taxes which is completely out of the question and the other is increasing debt. The debt to GDP we expect will g above 100 per cent.” Cooper had previously forecasted in Parliament that government would have to borrow up to $2 billion.

“This is not the time to focus on debt ratios, this is the time to provide relief to our people, time to grow our economy and if we do this successfully in a matter of five to seven years this conversation will be an academic one,” said Cooper.

While Moody’s recently placed this nation on review for a credit downgrade Cooper said, “They must do what they must do. We have a country to run, we have employment to create and an economy to restart. That is what we must focus on. We must protect the vulnerable, we must boost the domestic economy and in particular small businesses that account for 70 per cent of the employment in the country. The reality of where we stand is that failure is not an option. We have limited options. Our economy is such that we cannot just print money like the US and some other large countries can do.”

Cooper noted that government must work with business community to ensure that as many businesses as possible retain employees. Among the recommendations being proposed are tax credit for businesses and assisting NIB in payment administration, areas the government appears to have already have made efforts towards.

Cooper said it is also recommended that the government form a broad based debt management committee broader based, adding private sector experts to the committee.

“We recommend that the government issue COVID bonds,” he said.

“We anticipate three separate tranches. One tranche he explained would be a long term bond, likely 40-50 years for insurance companies and pension funds. We believe the demand for that would be in the region of $350 million.

“We are recommendation that initially that component be $750 million keeping in mind the existing allocation by the Caribbean Development bank of $50 million for a total of $800 million to help support the budget,” said Cooper.

Cooper added that the plan also recommends that the government obtain dividends from some of the cash rich entities such as the Bahamas Maritime Authority, URCA and the Insurance Commission. Entities like that typically do very well when they collect the taxes, and therefore the government should draw down on those, he said.

Cooper underscored the government must also ‘tighten its belt’ by eliminating waste, targeting efficiencies, halt non essential travel and expenses, with those savings re-purposed for social assistance, and unemployment assistance.

He also urged against’ double dipping’, noting that there are persons earning consultancy fees who should not also be earning a salary.

It was also recommended that the government seek to capitalize on the record low oil prices.

Cooper said: “It is my view that if we reduce light bills by 25 per cent we can improve GDP by one per cent alone. If the government can work alone with BPL to buy certain hedging instruments or to buy large quantities of oil that might help us to hedge against increasing oil rates in the future and allow us to ring down the cost of electricity.”