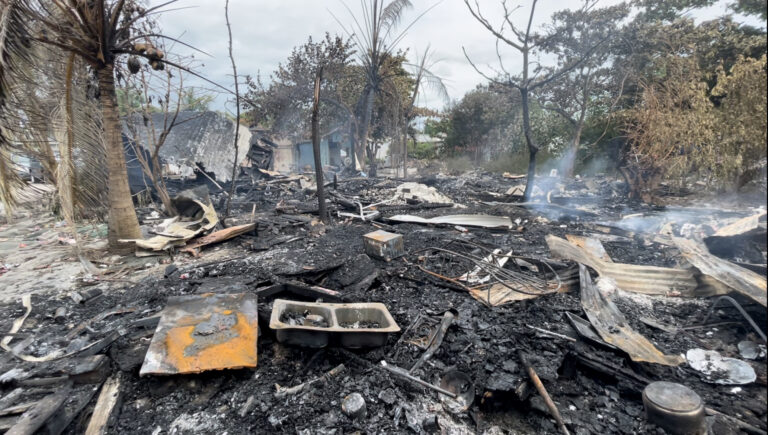 NASSAU, BAHAMAS — Souvenance Louis Similien, 27, a resident of a shantytown off Joe Farrington Road, who along with five other families lost their homes in a fire on Sunday, said yesterday that he has nothing but the clothes on his back.

“It’s one thing to say you want to get rid of, but you also have to understand many Bahamians live there in those areas, and so you want to assist and be able to provide some sort of alternative area for them to relocate…” — JOBETH COLEBY-DAVIS

Standing beside the charred remains of the five structures, one of which was a two-storey home, a tearful Similien pointed to a derelict silver sedan adjacent to the property.

The vehicle is where he will sleep tonight and for the foreseeable future.

The mechanic has been a resident of the shantytown for 12 years.

He and his brother, who was left the homes by their grandmother, planned to purchase the land

According to Similien, the fire was the result of arson by a neighbor who had an alleged domestic dispute.

“I don’t have nowhere to sleep,”

“Listen, I don’t have nowhere to sleep.

“I can’t tell you what this feels like. I want to cry right now.

“I didn’t do anybody anything to deserve this.

“Look what they do to my house. That’s my house? It was two-storey you now, but look.

“They burn one to the end and when they burn one, look, all come down.”

A young mother, who identified herself as ‘Precious’, said she did not know what will happen next.

Asked if she had relatives to stay with, Precious said: “No.”

“I honestly don’t know what I am going to do,” she said with a shrug as she turned her back to the smoldering rubble.

No one was injured during the blaze at the furthest corner of the shantytown.

It erupted around 7.30 pm on Sunday, according to residents.

Authorities continue to investigate the matter but have not reported a cause as yet.

Minister of Transport and Housing Jobeth Coleby-Davis said a team will be sent to the areas to perform an assessment.

“That’s my constituency, so it’s even more of a reason for me to get an assessment done and speak to the families and understand what their loss was, what the needs are; and then to partner with the Ministry of Social Services to see how we can best provide assistance and provide them with the help that they need,” she told the media outside of Parliament.

“And then from… there we will build out that plan on how we will assist them.”

The former administration took steps to remove shantytown communities, though their efforts were blocked by a court injunction and judicial review.

The Minnis administration pledged to make land available for purchase to residents of those communities and process irregular residents.

Asked about her approach to the issue, Coleby-Davis said she will consult with her Cabinet colleagues.

The minister said: “It’s one thing to say you want to get rid of, but you also have to understand many Bahamians live there in those areas, and so you want to assist and be able to provide some sort of alternative area for them to relocate…”

She said a plan will be produced for relocation, which will be a combined effort across several key ministries.