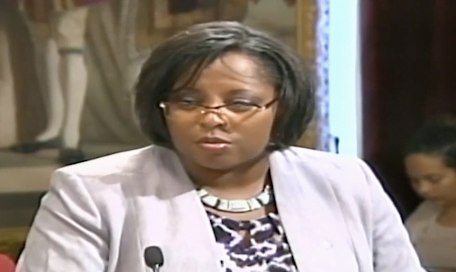 NASSAU, BAHAMAS — Senator Lisa Bostwick-Dean yesterday debunked rumors she will receive a candidacy nomination for the Seabreeze constituency, insisting she will not be vying for a seat in the upcoming general election.

Bostwick-Dean made the announcement in the Senate as she warned Bahamians to be careful of where they get their information and only trust reputable sources.

She pointed to claims that the Free National Movement (FNM) intends to name her as the next candidate for the constituency following the resignation of Seabreeze MP Lanisha Rolle from her Cabinet position.

“I assure The Bahamas, I am not the next candidate for Seabreeze,” she told senators.

Bostwick-Dean noted that while the information may have been reported by a reliable news feed on social media, it is not true.

She thanked all of the people who reached out to her to support her in the venture.

“I thank each and every person that made that call, but sadly, at this time, I am unable to do so; but I thank those who would have come forward and offered their support,” Bostwick-Dean said.

“Whoever is the next candidate for Seabreeze, I wish them well. I wish the entire FNM slate well.

“We are saddened that in fact we have to look for a candidate in Seabreeze and we wish the former minister well.”

Rolle tendered her resignation from Cabinet on Tuesday, becoming the fourth minister to resign this term.

She did not provide a reason when she confirmed her decision to Eyewitness News; however, she said she will continue on as the MP for Seabreeze to fulfill the contract she signed with voters.

The Cabinet Office confirmed the prime minister’s acceptance of Rolle’s resignation as minister of youth, sports and culture, indicating certain matters brought to his attention are currently “under investigation”.

It is unclear whether the incumbent will receive the nomination for the seat in the upcoming election.