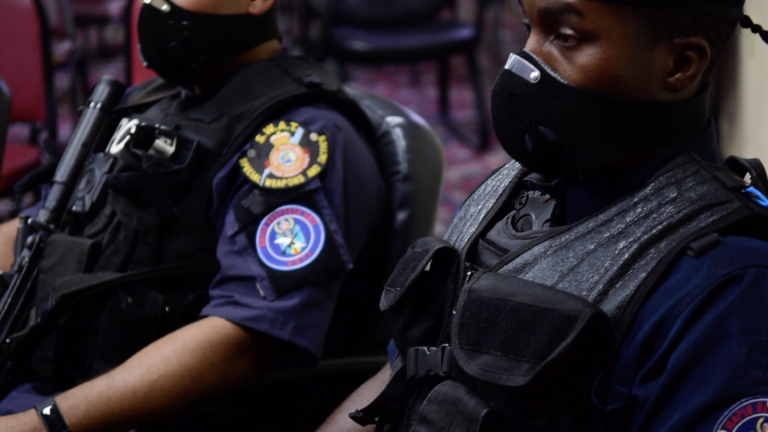 NASSAU, BAHAMAS — Commissioner of Police (COP) Paul Rolle yesterday reiterated his position on the release of body camera footage in police encounters, insisting that serious matters, such as police-involved killings, will be handled in court.

Rolle’s comments come amidst ongoing calls from the public to release footage from interactions with the police — the most recent being the arrest of a suspect which resulted in two dogs being shot.

The COP has previously noted the public should not expect the release of footage to be similar to the process followed in the United States.

“When the case is heard, those evidence will all be unsealed and will be available at that point once they have been tendered in court,” he explained.

“It wouldn’t be immediately after the shooting, but they will have access to it eventually.”

Rolle indicated that certain footage from body-worn cameras of pursuits and other “encounters” could be released to the public.

“There are times where we may need to provide information to the public where we may require assistance from the members of the public — those will be released,” he continued.

“But clearly if it’s something where it will be going to the court, how much of that can be released to the public because it is going to be tendered in court as evidence.”

Rolle added: “We have to guard the evidence at all costs. The access involved do not have access to that evidence and once the evidence is taken from the system, that is then stored on the device that goes to court; so, we don’t keep them.”

There were 20 incidents of police-involved shootings in 2020 that resulted in 11 deaths, according to police statistics.

That’s why this country needs innovation and new leaders in place, people that actually understand about human rights, I am not from here but I see so much inequality here and this COP it is just a dictator that do what he wants, say what he wants and build his team to feel entitled because he just want to be “tough” with citizens, this system is really a reflection of a below third world country and of course they wouldn’t be able or want to follow rules and show what they are really about. That would take his credibility and power away and his job lately is just answering to very fishy decisions and lack of real leadership, he would be retaliated against in the USA, here people don’t have the guts because this military police take their rights away since they follow no rules, his concern is about 1 ounce of weed versus creating an environment and trust and respect between citizens and the police he is in charge of.