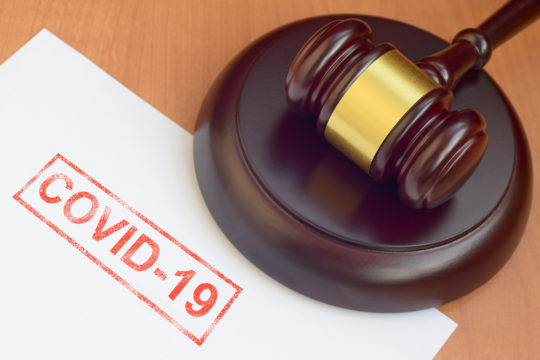 Deputy chief magistrate: “When we don’t have persons acting in good faith, the entire system will collapse”

NASSAU, BAHAMAS — Nine people, including a 17-year-old juvenile, were arraigned in the Magistrate’s Court yesterday for possessing and uttering forged coronavirus test results.

The group is the first to be charged with the offense under the country’s COVID-19 regulations.

The prosecution alleged that on March 26, while at Lynden Pindling International Airport (LPIA), Scott, with the intent to defraud the execution of the law, had in his possession and presented a forged Doctor’s Hospital Health System negative COVID-19 test, knowing it was not genuine.

After he presented the test to the COVID-19 ambassador, who became suspicious, he was arrested and cautioned.

The prosecution noted that Scott admitted to the charges during his interview with police under caution.

His attorney argued that he has never been arrested for anything in this jurisdiction and did not seek to waste the court’s time with a lengthy trial.

He said Scott was “contrite and compunctious” for his actions.

The defendant, who works as a fisherman and is the sole provider for his children, was reportedly taking his one-year-old child from Freeport to visit his other children on Andros.

The child has been in the custody of Social Services since his arrest.

His attorney asked the court for leniency on his behalf.

Forbes, however, insisted that it was a serious matter that cannot be taken lightly.

Forbes explained the rationale behind the negative COVID-19 test requirement, which is to allow a person who is not exhibiting symptoms to be in the presence of others while traveling.

“When we don’t have persons acting in good faith, then the entire system will collapse,” he added.

The defendant reportedly took a COVID-19 test on Saturday that came back negative.

Forbes told the court that he needed more time to further consider the matter before sentencing.

Scott was granted $2,000 bail with one or two sureties and will have to return to court on April 7 for sentencing.

He cannot leave the capital before the hearing and must report to the Carmichael Road police station.

Meanwhile, Smith, 41, of Georgetown, Exuma, pleaded not guilty and elected to have her matter heard in the Supreme Court.

Smith advised that she does intend to return to Exuma, where she resides.

She was granted $2,000 bail with one or two sureties and has to report to the Georgetown Police Station every week. She will return to court on July 28 for trial.

Taylor, 27, of Golden Isle Road, and Rolle, 37, of  Charles Saunders Highway, both pleaded not guilty to the charges.

Munnings, 24, of Balls Alley, pleaded not guilty to the charges and was granted $2,000 bail with one or two sureties. She has to report to the Central Police Station every week until she returns for trial on July 28.

Samuel Colebrook and Janae Jolly, along with a 17-year-old juvenile, appeared before Chief Magistrate Joyann Ferguson-Pratt on the same charges of possession of a forged document and uttering a forged document on March 26.

Colebrook, 24, of Lowe Sound, Andros, and the juvenile both pleaded guilty to the charges and were released on their own recognizance. They return to court on April 1 for sentencing.

However, Jolly, 25, of Pinewood Gardens, pleaded not guilty to the charges.

The prosecution advised the court that it needed more time to review the defendant’s file.

She was subsequently remanded to the Bahamas Department of Correctional Services until April 1, when she will return to court.

Two other people, who were arrested on March 26, also appeared before Ferguson-Pratt on the same charges, however, due to challenges with their court dockets, the matter was stood down until April 15.

The pair was released on their own recognizance in the sum of $3,500.

So what about the persons on saturday 27th that were also arrested embarrased threatened with this $4000 foolishness that were in possession of THE REAL COVID TEST ..REAL NEGATIVE RESULTS FROM DOCTORS HOSPITAL ..REAL 134.40 PLUS $5 FEE RECIEPT CHARGED BY BOB LTS ON THE CREDIT CARD, INCONVIENIENCE BY COVID POLICE STUCK IN NASSAU HAVE TO FIND ACCOMODATION MEALS TRANSPOETATION AND THEY STUFF REAL REAL WITH REAL PROOF OF THERES REAL DOCTORS SHOWED THEM ITS REAL THATS WHAT WE GAVE SO WHAT ABOUT THESE SET WHO AT THE END OF THE TERRIFYING ORDEAL RECIEVED A ” AW WELL YOURS LOOKED LIKE THE ONES THEY TOLD US TO LOOK FOR” ” OH WELL THIS IS A LEARNING EXPERIENCE ..VIG NAME COMPANY DONT MEAN NOTHING” REALLY REALLY IS THIS THE BEST THEY COULD DO IS THAT THE EXPLANATION FOR THE HURT PAIN AGGREVATION THEY WENT THROUGH AFTER FOLLOWING MR PMS PROTOCOL REALLY?? SONNY THE SYSTEM ALREADY FAILED CAUSE YOU GET LOCKED UP WHETHER THE TEST IS REAL OR FAKE..THIS IS WHAT HAPPENED SOOO.TELL ME???