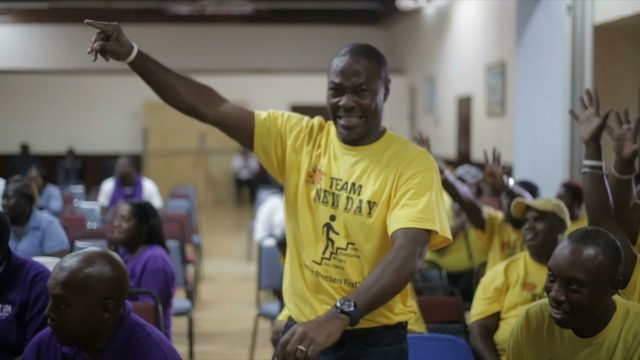 A union member supports his group at nomination day.

President of The Bahamas Catering and Allied Workers Union (BHCAWU) Nicole Martin said Tuesday that she’s leaving behind a relatively clean slate for the union’s next president.

‘When I became president, things were in complete chaos,” Martin said as members looking to be elected to the executive team nominated yesterday.

“I’ve been in more court sessions than anyone in our unions history, but its serve as a stabilizing exercise because, whoever now takes the mantle, will have an easier time than I did.”

Martin said during her time in office, she learned at different points union members look for different things.

“Hotel unions are usually smooth even though they can be seen as contentious,” she said.

During the nominee party held Tuesday morning a number of altercations broke out between parties, and, while they were minor disagreements involving what some thought was party discrimination and social media bashing, Martin called it all passion for the greater cause.

“Their fights led us to court,” she said.

“What I needed to do was to stabilize the union.”

Martin said it’s that same passion in choosing a president that is also displayed in workers performance on the job.

Leader of The Phoenix Darren Wood told Eyewitness News that, “This is a different experience for me. I would’ve ran for the general secretary for the past nine years, and we were successful.”

“Once we’re elected we have to ensure that our membership is part of the organization.