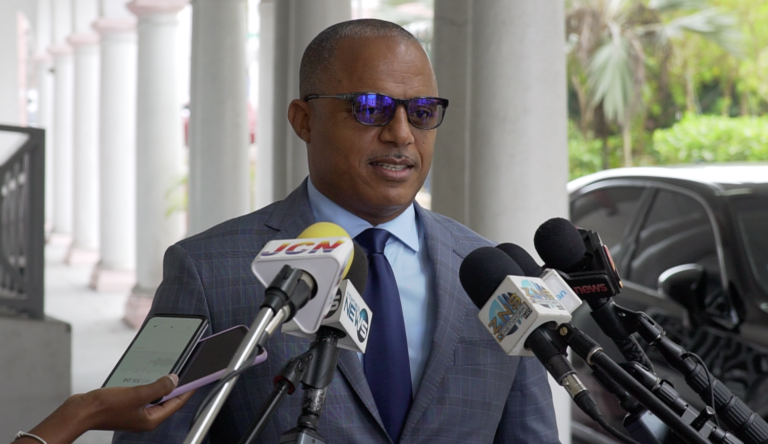 NASSAU, BAHAMAS — Minister of National Security Marvin Dames said yesterday there is “no place” in the armed branches of law enforcement for rogue officers who act in contravention of the law and act improperly against the people they swore an oath to serve and protect.

He was referring to an officer being placed on administrative leave pending an investigation after several men filed a complaint alleging they were beaten while at the Arawak Cay Police Station.

An audio recording of the alleged incident has made the rounds of social media.

Outside the Churchill Building, Dames suggested the exposure of incidents of alleged abuse by those in authority is a “good thing” as there is no room in the organization for such conduct.

“We want to get to the bottom of it,” the minister told the media.

“The commissioner and the Royal Bahamas Police Force will get to the bottom of it.

“And I am very confident in my discussions and conversations with him this morning that he would do the right thing to ensure that he gets the answers he needs.”

Asked whether he is concerned about the incident and others of alleged abuse undermining the reputation of the police force, the minister said: “This is the era we are living in. Things, as they happen, they are being disseminated.

“This is the world that we are living in today. And so, I mean we talk about body cam and dash cam — well, we have cellphones, which is just as good.

“And just about everyone walking has a cellphone in his or her hands; you can record video or voice recording.

“And so, those of us in authority should act accordingly and I think it is a good thing.

“It’s a good thing. And [I’m] not saying this is the first time we would have had an incident such as this.

“This is the world that we are living in and everything is under the microscope.

“And so, it is incumbent on public officers to conduct themselves accordingly as they are hired by the people.”

Asked about those who remain hesitant to report police officers for erring the law, including matters of alleged abuse, Dames said: “There is no need to fear. Police officers, law enforcement officers, they work by consent — the consent of the people they have taken an oath to serve.

“And any time law enforcement officers go contrary to that, then there are consequences.

“For the most part, the vast majority of officers and law enforcement are good, decent people, who would have taken an oath and are standing by the oath they took, and they take their jobs very seriously for the most part.

“There are times when officers go astray. Well, when they go astray then they ought to be dealt with. Officers are hired to take care of us — you and me.

“A rogue officer is bad for policing. It’s bad for law enforcement. He brings disrepute to himself, to the organization he serves and to the people he or she would have taken an oath to protect. And there is no place in any of these agencies for any rogue cop — no place.”