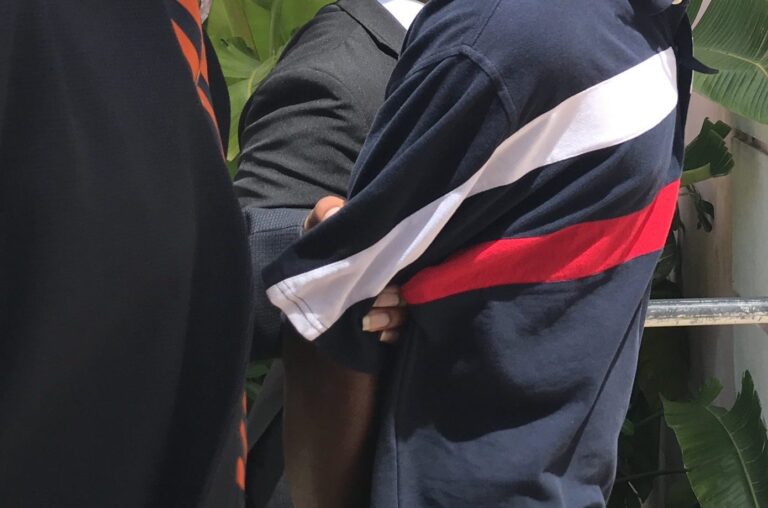 A handcuffed man is escorted into court in this file photo.

NASSAU, BAHAMAS — Commissioner of Police (COP) Paul Rolle said he intends to make recommendations to put an end to people being handcuffed, shackled and paraded as they are being escorted to court for arraignments.

While appearing as a guest on ILTV’s Beyond the Headlines with host Clint Watson on Tuesday night, Rolle was asked about the practice that usually presents an image of guilt, even though it is up to the discretion of the police.

Rolle admitted that the whole process with bail is “discriminatory”.

“We had a policy that was put in place before my time, which mandated that everybody who goes to court were to be handcuffed,” he said.

He explained that the matter has been a longstanding debate within the police force, since his early days as an officer.

He also noted that, after discussions with his senior team, “I would like to see that changed”.

The commissioner said, however, there are several challenges to seeing this practice eradicated.

Among those issues is the demand of the media to get footage of people prior to arraignment and the fact that the court complex is separate from the jail cell where prisoners are kept.

Rolle explained that when individuals are taken into custody and prepped for arraignment, they are held at the South Street Police Station and then walked over to the Magistrate’s Court.

“We have a back door to the court complex. The problem with that is it was poorly designed,” he said.

“…There’s no other way to get them there unless we take them straight in.”

He continued: “In other jurisdictions, you’d know that the jail is in the court and everybody is brought from within. You don’t have this scenario where you have to talk about the ‘Bank Lane shuffle’.

“These were things that we’ve been doing for many years and I think it’s a good time to look at changing it.”

Rolle said he intends to make recommendations to “those responsible” to see whether or not they can help redesign the facility to allow for a better process.