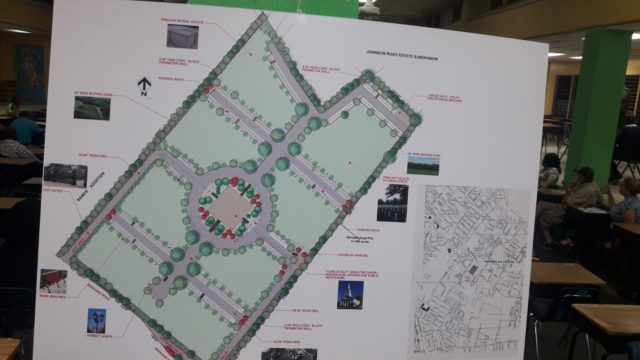 A rendering of the proposed private graveyard for the Fox Hill community.

Residents in the Fox Hill constituency Tuesday rejected a proposal for a private cemetery to be constructed in their backyards.

Officials from the Town Planning Committee held a public hearing at L.W. Young Junior High School last night to get feedback from residents on the development before deciding if it would approve the project.

The 13 acres of vacant land owned by James Bain, is situated between Johnson and Bernard Roads, opposite Monastery Park and Windsor Road, near Budget Convenience store. Bain is pushing for the project, citing the need for another cemetery in the capital.

Residents in the area, however, are railing against it, claiming that this type of development is not beneficial to the community and will impact their quality of life.

“I don’t want a graveyard in my backyard,” one resident screamed, as tension at the meeting intensified.

Many of the residents said their main concern is the potential traffic nightmare a cemetery would create in an already congested area.

“Can you imagine what will happen on a Saturday or Sunday when four and five funerals are taking place? We will be trapped in our homes.”

Other residents added that any change in the area’s geography will impact the water table and compound flooding in the district.

Fox Hill Member of Parliament (MP) Shonnel Ferguson also weighed in on the development and called for the committee to conduct an environmental and traffic impact study, before any decision is made.

“I was born on that property so I know and understand the concerns,” she said.

“We need to take those things (studies) into consideration. Yes, we know that it is his property, but people also have a right to share their concerns and have that taken into account.”

Former representative for Fox Hill and Progressive Liberal Party Chairman Senator Fred Mitchell added, that there has been much opposition to the proposed development and residents have signed a petition against it.

“I understand why they are frustrated,” Mitchell said.

“They are concerned about the quality of life and how they will be impacted if this development is approved.”

Residents also questioned how the area was zoned.

Ministry of Works Director Craig Delancy explained that portions of the property is regarded as residential, but several acres, he said, are for commercial use. But Delancy said, “ circumstances change.”

This caused outrage from residents who opined that the change was based on “convenience”.

“Anyone has a right to submit an application to the Department of Physical Planning and we simply want to hear from you, your thoughts on the project,” Delancy said.

“We can have a robust discussion … based on the lining path along Bernard Road … 150-200 feet depth from Bernard Road in land is regarded as commercial, and the interior is residential.”

Chairperson of the Town Planning Committee Dianne Hollowesko-Dunkley added that, according to the Planning and Subdivision Act of 2010, Bain has the right to develop his property.

“On the other hand, every application that the committee receives, we are mandated to take into consideration the health, safety, welfare and convenience of current and future residents of the area,” she said.

“When we debate an application, not only are we looking at whether or not it applies with the land use, but we are considering those other factors.”

While there is not timeline on when the committee will make its decision, residents are calling on government to have the project shelved.