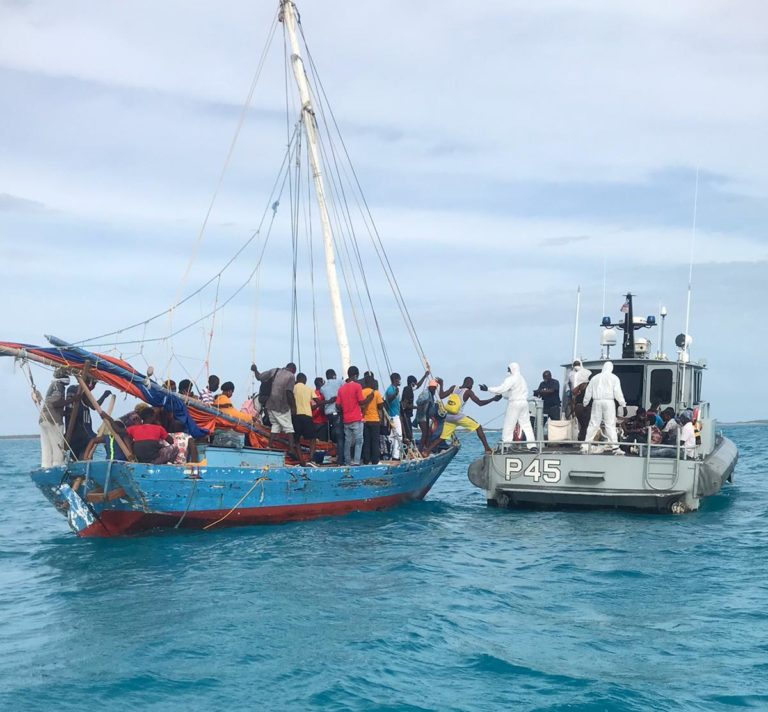 A group of 44 migrants were apprehended on a Haitian sloop about a mile northwest of Norman's Cay shortly after 3pm on August 2, 2020.

Johnson underscored the cost was not only financial, pointing to risks to livelihood as the country grapples with rising coronavirus cases.

His comments come just days after 44 Haitian migrants were apprehended in the Exuma chain on Sunday, shortly after 3pm.

Among the group, there were 35 men and nine women.

“We now have to go to a situation where we have to send these people back home,” he told reporters outside Cabinet.

“We don’t have the funds to constantly have to take persons into custody and spend thousands of dollars to have Bahamasair or a private entity fly them back to their country.

“So I want Bahamians to partner with the government to deal with this.”

Johnson continued:  “We have to find medical healthcare for frontline workers…These are difficult times and I’m hoping that Bahamians do not allow people to abuse our country.

“We are doing our best, those officers are doing their best, putting their lives on the line to protect those individuals, to provide them with the services they need and as soon as possible to put them on a flight back home”.

The migrants were reportedly examined and temperatures recorded by the RBDF medical team prior to handover to the Department of Immigration on Monday.

According to a statement, the migrants were placed in isolation upon arrival at the Carmichael Road Detention Centre and assessed by the Ministry of Health’s surveillance team.

Johnson said while he could not speak to the exact costs for the repatriation of migrants, “there’s more than just a financial cost”.

He urged Bahamians to take the spread of the coronavirus seriously as immigration workers, law enforcement and healthcare workers risk their lives on the frontline of the COVID-19 fight.

“It’s a financial cost if people get sick,” he said.

“It’s [also] life cost. We have immigration officers who have tested positive and who are now quarantined”.

Immigration director Clarence Russell previously confirmed some 29 immigration officers have had to quarantine during the pandemic. Russell declined comment on how many officers have tested positive for the virus.

“So if you’re talking about cost, you are talking about someone being dead. That’s the ultimate cost that we are having to pay in these, when people are being irresponsible, so I want persons to take this very seriously.”

She died in Princess Margaret Hospital shortly after being airlifted from Bimini on March 30. Since then the number of COVID-19 deaths has risen to 14.

Johnson said: “You have frontline workers, you have police officers, you have nurses, this thing is dangerous.

“To the extent that you have to come out and put on these masks and be about, your life is at risk, this is not a joke.

“And why I’m so impassioned, I was in shell shock when my father’s most strongest went down.

“This is no game so we must listen to the medical experts who are themselves trying their best in these difficult times. We must try our best to be sensible, be much more dispassionate, much more honest in how we treat with this.”

Is the Haitian goverment being charged at all for their citizens coming into the Bahamas illegally? If not, I think the Bahamas goverment needs to bill the Haitian government for every migrant we have to repatriate. The responsibility must lie at the feet of the Haitian government for not disciplining their citizens for not wanting to stay in their own country and build it up. We must investigate further who in our population is gaining financially from this exercise on the Bahamian border and the Haitian border by the migrants being able to come and stay in the Bahamas illegally. Someone needs to be held accountable for depleting our National funds for this madness for the last 80 years.Nothing will change if the Bahamian government doesn’t get serious about fighting this criminal activity. There will be no Bahamas for future generations of real Bahamians to own because persons of Haitian descent believe that they have a right to the Bahamas. Haiti is much bigger in land mass than NP, Abaco and some of the other islands so i dont understand why they wont stay at home and build their country. Bahamians cannot and will not allow this to continue.

This is conflicting as some jobs hold more risk than others. However, what is the plan moving forward to reduce these financial costs while ensuring our borders are safe?

Why should the native Haitians be disciplined or punished for wanting to leave a country with a corrupt government? If you lived in that shitty country you would want to escape also. They are desperately searching for a better life for themselves, you cannot blame them for that. They live in extremely dire and poor conditions and their government does not help them. Put yourself in their shoe and have some compassion and empathy for people. They are clearly suffering.