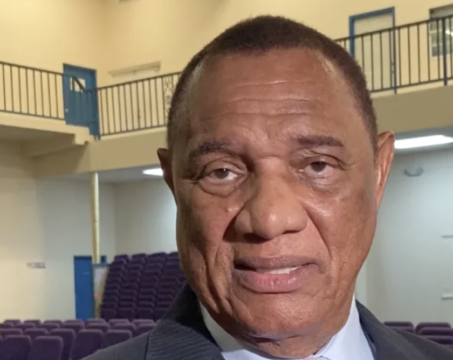 Christie suggests tourists should be vaccinated too; says it is of “paramount interest” to the country

NASSAU, BAHAMAS — Former Prime Minister Perry Christie said he does intend to take the coronavirus vaccine when it becomes available in The Bahamas.

He joins the country’s remaining prime ministers — current Prime Minister Dr Hubert Minnis and former Prime Minister Hubert Ingraham — who have both previously said they, too, will take the vaccine when it becomes available.

“Most certainly whenever we are able to have the opportunity to take a vaccine, I will,” Christie said, in an interview with Eyewitness News yesterday.

“My wife and I have discussed this a long time ago and we decided that. But I want to make sure that there is no ambiguity or confusion as to whether or not over 65-years-old should take it.”

Christie said he will have to seek the proper advice as to whether or not it is safe for him to take it.

The former prime minister is 77 and will celebrate his 78th birthday in August.

A total of 100,000 doses of Oxford’s AstraZeneca COVID-19 vaccine are expected to arrive in-country shortly, according to health officials.

While the government originally planned to limit the AstraZeneca vaccine to adults under the age of 65, it later determined the vaccine will be administered to those over 65 after the World Health Organization (WHO) recommended its use for all adults who choose to take it.

It is estimated individuals over the age of 65 make up just over seven percent of the population.

The first tranche will be used to administer the first dose of the vaccine to 100,000 people, beginning with “priority groups” including healthcare workers, the uniformed branches and older care providers.

The government has continuously said Bahamians will not be forced to take the vaccine.

However, Christie urged Bahamians to be prepared to take that route given the way the world is moving.

“Clearly, it is in the paramount interests of our country that people take the vaccine,” he said.

“It’s in the paramount interest to follow what is happening worldwide because the major industry in our country is tourism and there is a tremendous concern on the part of countries about people traveling without the vaccination.

“You are going to find, therefore, that The Bahamas has to ensure that the policy it adopts with respect to moving forward would be consistent to best health practices whilst at the same time taking into consideration our vulnerabilities as a tourism destination.

“In other words, we have to be very wise, very smart, in making our decision with respect to ensuring that people who come into this country, in essence, themselves have been vaccinated.”

With the global push towards coronavirus vaccination intensifying, scientists in the United Kingdom have put forth the view that vaccine passports are feasible, even though all the pieces are currently not in place to allow one to be effectively delivered.

Meanwhile, the Global Tourism Crisis Committee has underscored the need for vaccine passports to jumpstart international tourism amidst the ongoing global pandemic.