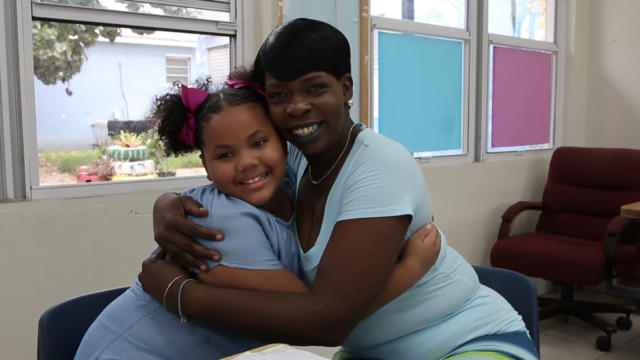 Cahya Smith embraces Antoinette Fernander for a hug after discussing ideas on building a home for the St. Anne’s janitress, who has been evicted several times in the last two years and faced homelessness over the past four months.

After learning that her school janitress was evicted from several apartments and has been homeless for over four months, a fourth-grade student of St. Anne’s School said she plans to assist her in building a home she can call her own.

Nine-year-old Cahya Smith said that after finding out Antoinette Fernander, 48, had been evicted from multiple apartments over the past two years, she saw an opportunity to help.

“I feel like nobody should be on the sidewalk or have nowhere to lay their head,” she told Eyewitness News.

“I want everyone to be in a sheltered place and have somewhere to sleep, and just be with their family.”

Smith’s mother, Letitia, said even though the task is a lot for a fourth-grader, it is feasible, especially with support from the public.

“But you will be seeing us. She (Cahya) has plans for a fundraiser coming up.

“So, you’ll see us; we’ll be in the streets and we look [forward to] your support.”

Smith, who described the administrators, staff and students at St. Anne’s as a family, said Fernander is more than an employee, but is widely considered a second parent for many on campus.

“She takes care of me while I’m at school and she looks out for me.

“She does stuff like a mother would do, but she’s my mother at school.”

Fernander, a single mother of seven, who has worked at St. Anne’s for over a decade, said she was grateful for the assistance, recalling the struggles she has faced in recent years.

“Being a single mother of seven, I’ve been paying rent for a very long time,” she said.

“Recently, something really drastic happened to me.

“I’ve had some very bad experiences renting from people, so I want to invest in owning a home.”

Admitting that the task seemed impossible to achieve initially, Smith said she is to determine to not give up, noting that it is important to try and fail.

She said, “Life is too short. I feel like you should just help the world to be a better place, before it’s your time to go up to heaven.

“My purpose in life is to help others.”

This article was written by Marechan Burrows – Eyewitness News Intern