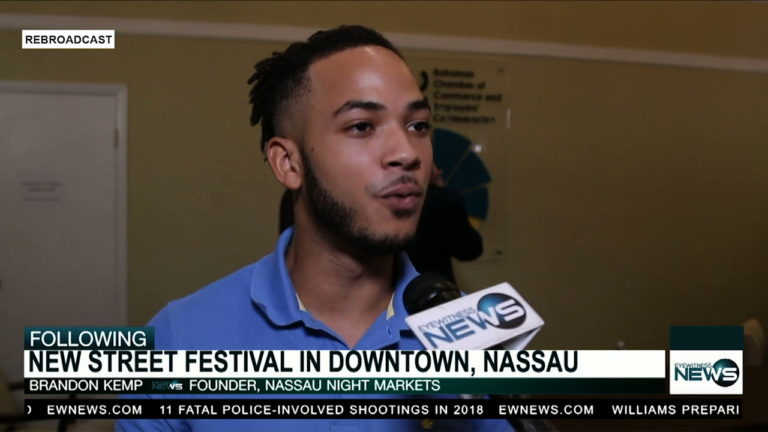 NASSAU, BAHAMAS – A new nighttime cultural event held every Saturday in Downtown, Nassau is hoping to re-energize the city’s centre with an injection of live entertainment and artisan craft.

The event, Nassau Night Market, is the brainchild of young entrepreneur Brandon Kemp.

The street festival begins at 3:00 p.m. every Saturday and runs until midnight.

Kemp told Eyewitness News Online that the idea was sparked to provide something for Bahamians and tourists to do after normal business hours in Downtown, Nassau.

“We typically close off a street downtown and fill it with food vendors, drink stalls, domino tables and artisans with handicrafts and we also invite artists to come and perform and demonstrate their work,” Kemp shared.

“So, we just create an exhibit of Bahamian expression of art.”

Nassau Night Market is held at Market Slope near the World-Famous Straw Market.

Kemp explained that the street festival, while intended to be a night market, has launched during the afternoon hours in an effort to gain momentum.

In the end, Nassau Night Markets will be solely an after dark event, Kemp confirmed.

“We start at three because there isn’t that much life going on downtown so we start a little it earlier to catch that crowd before the cruise ships leave; but as this eventually gains a reputation, and more people come out, then it will be purely a night market,” Kemp noted.

To date, artisans who have presented various forms of Bahamian art products for sale during Nassau Night Market, have managed to make encouraging amount of sales during the weekly event, according to Kemp.

Optimistic about the future of the event, Kemp said he envisions that he and his team will soon be able to close off more streets downtown to expand the scope of the street festival.

“With each event, we will have local performers whether it’s a local band, fire dancers, steel pan performers, singers or local rappers. We are really trying to create pockets of different Bahamian expression in various areas in Downtown, Nassau.”

“With this incredible level of support, we can expose more Bahamian entrepreneurs to more customers while making downtown the kind of place where more people want to spend time at night. This is huge for us. We are very grateful.”