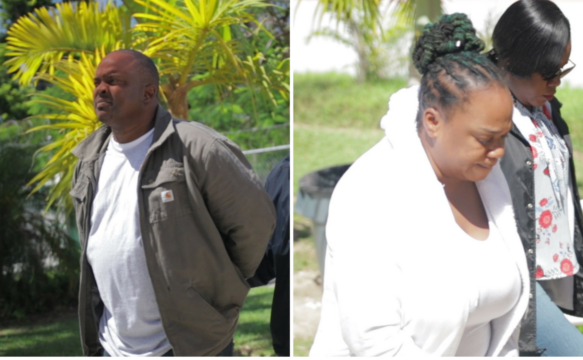 Shorn Munroe, 46, and Nickoya Demeritte , 36, are hauled into court Friday.

A 46-year-old man pleaded with the court on Friday to “let his wife go” moments after they were both charged in connection with the discovery of $20,000 worth of marijuana.

The newlyweds, who appeared before Deputy Chief Magistrate Subusola Swain, were charged with possession of dangerous drugs with the intent to supply.

According to reports, shortly after 6:00 a.m. on Thursday, Drug Enforcement Unit (DEU) officers, acting on information with a warrant went to home on Venice Bay where they observed a male throwing a blue bag taken from the home, over a fence.

Officers retrieved the bag, conducted a search of it and recovered 22 clear vacuum sealed packages of marijuana. The male was taken into custody.

Further inquiries led to the arrest of an adult female who was in the home at the time.

Shorn Munroe pleaded guilty to the charges and his wife, 36-year-old Nickoya Demeritte pleaded not guilty.

Before he was sentenced, Munroe begged the court to “release his wife” because “she knew nothing about the drugs.”

“Your honor she was at work when I got the packages, I am taking full responsibility she had no idea,” Munroe cried.

“I do not sell drugs. I was asked to hold the drugs. My boy told me if I held the drugs I can have two pounds to smoke. I am a successful contractor with a flourishing business but I have a smoking problem. This is the first time that I was involved in anything like this. I work hard and I support my family, I have eight children with five women and I take care of all of them. My wife was not there. Please, I am taking full responsibility. Have a heart, please be lenient, please let her go.”

Despite his pleas, the prosecution declined to drop the charges against the mother of one.

Demeritte will return to court on Monday when it will be decided whether charges will continue or of they will be dropped. She was remanded to the Department of Corrections (DOC).

Magistrate Swain sentenced Munroe to one year in prison and he was fined $15,000. If he does not pay the fine, Munroe will spend an additional year in the DOC.