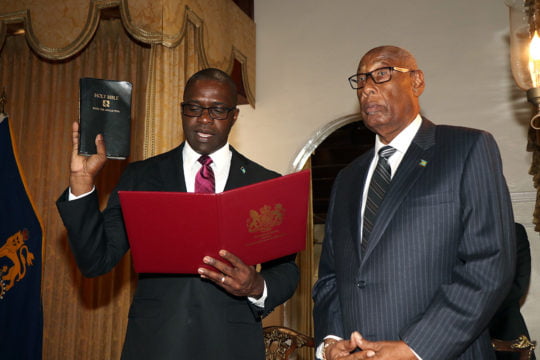 The Hon. Elsworth Johnson (left) was sworn in as Minister of Financial Services, Trade & Industry and Immigration by Governor General His Excellency Cornelius A. Smith during a swearing-in ceremony at Government House on Tuesday, July 2, 2019. Johnson told reporters that he has already begun talks with various stakeholders in his ministries, recognizing that Immigration may be the most challenging. (BIS Photos/Letisha Henderson)

Johnson’s appointment follows the abrupt resignation of St. Anne’s Member of Parliament, Brent Symonette, who officially announced his resignation from Cabinet on Sunday.

Johnson told reporters following the brief ceremony at Government House that he has already begun talks with various stakeholders in his ministries, recognizing that Immigration may be the most challenging. He noted, however, that he is tasked with ensuring that corruption is meted out at every level.

“The Immigration Department will work together under the spirit of the rule of law, to ensure that everybody is treated fairly. And treating people fairly means that we have to continue to create a system that responds in a timely manner and to continue to create a system that is fair and just for all. And so, when we start to speak about fairness, justice, and equality before the law, there is no place for corruption,” Johnson said.

Johnson said it is also his intention to fully digitize the Immigration Department to provide reasonable and fair service for persons seeking assistance.

Meanwhile, issuing a statement from St. Lucia where he is attending a CARICOM Heads of Government Meeting, Prime Minister Dr. Hubert Minnis said Johnson will also be responsible for the ongoing reform of the Department of Immigration, including speedier processing of immigration applications and addressing the backlog of applications.

The prime minister also expressed yesterday that he was pleased that Johnson accepted the appointment as Minister of Financial Services, Trade and Industry and Immigration.

“He has served as a minister of state in the Government for the past two years. I am confident that Mr. Johnson will work diligently to help to secure and promote our financial services sector.

“He will also be responsible for helping to promote trade and industry as the Government continues to secure greater Bahamian and international investments in our economy, including throughout the Family Islands,” the prime minister said.

“This includes support for small business development and greater Bahamian entrepreneurship in a variety of sectors.”

An attorney by profession, Mr. Johnson is a past president of the Bahamas Bar Association and member of the International Bar Association. He is a graduate of the College of The Bahamas and the University of the West Indies. Mr. Johnson has a record of community service, including as a Rotarian.

A descendant of Douds, New Bight, Cat Island, he is the Member of Parliament for Yamacraw.