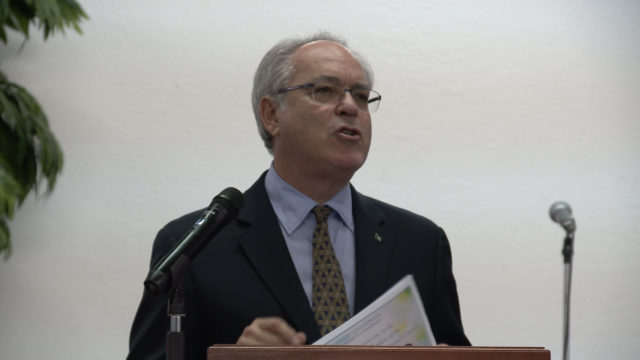 NASSAU, BAHAMAS- Parliamentarians on Wednesday began debate on the proposed amendments to the Immigration Act, with special focus on the introduction of a new visa, which the government expects will transform Grand Bahama into the technology hub of the Caribbean.

The BH1B visa, a special visa under the Commercial Enterprises Act, will give distinctive privileges to individuals who seek to set up tech companies in The Bahamas.

According to Financial Services, Trade & Industry and Immigration Brent Symonette, the BH1B will attract industries not currently in the country.

Symonette said that with the new visa, in one year, The Bahamas stands to make $325 million in through housing and transport investments, and $24.4 million in value-added tax.

“Let’s say we attract 250 companies at 500 people that would result in $10 million in immigration fees for the predominant work permit holders and some $2.5 million for the spouse or the child,” Symontte said during debate in the House of Assembly.

“It would mean some $430 million in salaries in The Bahamas and it would be $16.5 million in national insurance payments.”

The bill also proposes to create a trusted traveler program for professionals, who Symonette claimed are hassled by immigration officers because they do not have short time work permits.

“The head of an airline for the Caribbean came to one of our islands to talk about increasing the airline lift to Grand Bahama,” the minister said.

“He came here, and the immigration officer, because it has not been legislated, told him he needed a work permit.

“So, he said ‘give me my passport’ and went back on the plane back to Miami and as a result, you see what happened, no extra airlift.”

Despite Symontte’s assurances the visa is not intended to compete with Bahamians, Pinderidge MP Fredrick McAlpine said there is a growing fear that foreigners will come in on these visas and take Bahamian jobs.

“No one is running from globalization, but we feel like we are doing it at the expense of the Bahamianization and Bahamians are becoming extinct in their own country,” McAlpine said.

“So, we hear what you are saying, but we are trying to find the balance.

“At the end of day, Bahamians feel like they are being shoved out and pushed aside.”

However, Foreign Affairs Minister Darren Henfield said he has never heard those concerns.

“I have not heard that in my circles,” he said.

“All I hear is Bahamians being inspired under the economy of the Minnis lead administration.”

Symonette also pointed out that because the country relies heavily on foreign direct investment, foreigners will get jobs, however, he said Bahamians will always benefit.