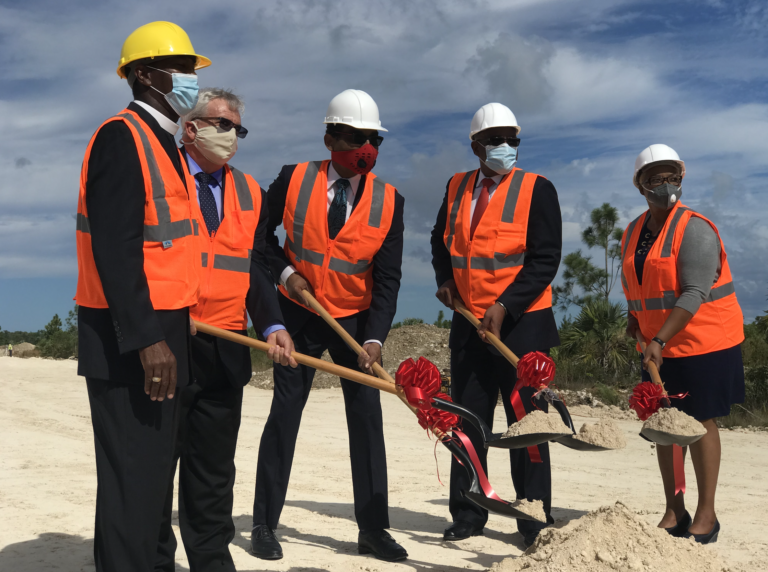 NASSAU, BAHAMAS — The government broke ground on the development of 365 serviced lots in the Carmichael Village subdivision yesterday as part of its Access to Affordable Homes program.

The new subdivision, located west of Lazaretto Street, is expected to accommodate single and multi-family housing, while additional lots have been slated for parks and other common areas for residents.

Prime Minister Dr Hubert Minnis said the development is in keeping with his administration’s commitment to creating more Bahamian homeowners.

“We believe that access to land and the opportunity to own land are among the greatest way to generate and to build wealth across generations,” Minnis said during the ceremony.

“For many Bahamians, land ownership means leaving a legacy for their spouse, child or parent.”

The subdivision is expected to comprise of 365 lots for home construction.

The development will be constructed in four phases, with the first phase providing 107 lots to Bahamian early next year.

According to the prime minister, lots in subsequent phases will come on stream shortly thereafter, though he did not provide a timeline.

Serviced lot owners will be eligible to benefit from concessions, including exemption of customs duties and excise tax on building material for the construction of their homes in accordance with the Access to Affordable Homes Act.

Ten percent of the serviced lots will be reserved for people with disabilities, Minnis said.

“I just want to state today that as I talk, especially to the young people and professionals, they all feel that they are somehow marginalized,” he said.

“I want to say to them that we are in the process and we have identified, without divulging too much information, land somewhere in the west and that land will be divided, subdivided, with proper infrastructure, condominium complexes, etc. and an upscale development will be developed for that group of professionals.”

Expounding on the project, the prime minister said he envisions the development resembling Venetian West, a luxury gated condominium and townhouse complex in western New Providence.

Additionally, the prime minister advised that construction has begun on five of the serviced lots in Sunset Close subdivision. He said an additional 10 lots were transferred to Bahamians in Lionel Davis subdivision in Fox Hill. In that development, one lot is under construction.

The prime minister also announced that an additional 21 serviced lots will be offered in the Spring City subdivision over the next several months.

“Under the land grants initiative, approximately 130 grants have been finalized for Bahamians.”

These grants were provided across eight islands.

Minnis also announced two 60-acre parcels of land have been transferred to the Disaster Reconstruction Authority.

He said homes for approximately 400 Abaconians will be provided.

Additional land is being identified on Abaco, Andros and Eleuthera, according to the prime minister.