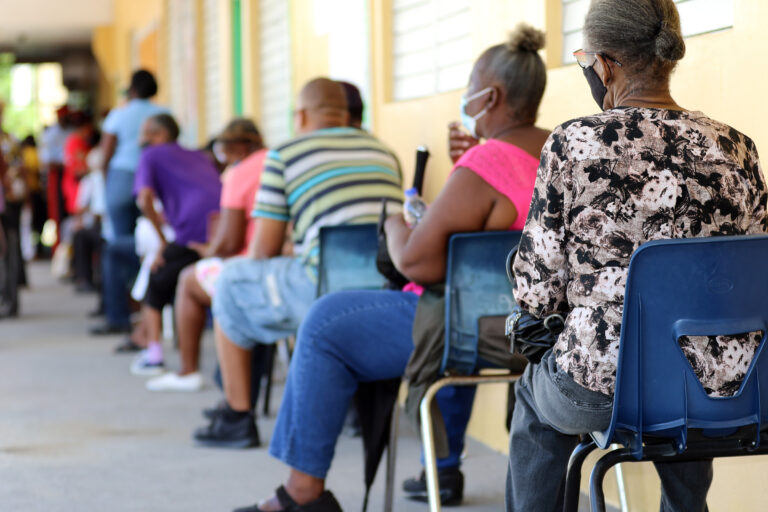 Voters in the Bamboo Town and South Beach constituencies sit while waiting in line to vote in the advance poll at CV Bethel High School on Thursday, September 9, 2021. (BIS/PATRICK HANNA)

NASSAU, BAHAMAS — The Parliamentary Registration Department has outlined specific COVID-19 health measures for Election Day, which includes the prohibition of political party campaigners on-premises or within 100 yards of the polling site.

It has been a longstanding tradition during General Elections for political parties to set up booths outside of polling stations, giving out water, snacks and also cheering on other party members as they go in to vote.

Thousands of early voters gathered on New Providence and Grand Bahama last week Thursday to cast their ballots in the advance polls but were met with a myriad of procedural issues.

Chaos erupted at several of the stations, there was little to no adherence to COVID-19 social distancing protocols at many of the stations, no marking or indications of proper protocols, disorganization, and limited rooms at polling stations for voters to cast their ballots which resulted in bottlenecking.

In a statement released yesterday, the PRD said it will ensure that all necessary health and safety protocols and precautions are enforced on Election Day, through a collaborative effort with the Ministry of Health.

Among those protocols: all rooms and walkways outside of the polling rooms should have clear social distancing markings on the floor; all voters, poll workers, and election agents are required to always wear a face mask while in the polling station, covering their nose and mouth, and all polling rooms – which must be 30 feet X 25 feet or larger — should be properly sanitized before and after election day.

Each polling site is required to maintain a register of all poll workers at each station, including their full name, shift times, and contact numbers, while surface areas in ballot booths and pencils to be used should be “sanitized throughout the day”.

Poll workers are also encouraged to be at least partially vaccinated.

While it was the first time that people 65-years or older were permitted to vote at the early polls, many voters expressed frustration due to the lack of provisions to accommodate the elderly and disabled.

The PRD advised that in order to correct those problems, concierge services will also be available at several polling stations around New Providence to assist senior citizens and the disabled.

A PRD officer will identify and greet all senior citizens and disabled people from the entrance of each polling place or who are standing on line and escort them to a designated covered area to expedite the process and then to their designated polling station where they will be allowed to vote immediately.