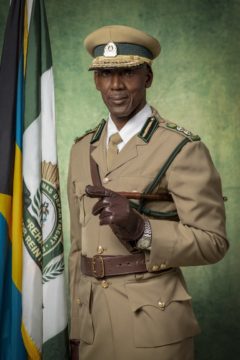 NASSAU, BAHAMAS – Minutes after receiving his instruments of appointment at The Bahamas Department of Correctional Services (BDCS) on Monday, Charles Murphy, Commissioner of Corrections, told Eyewitness News Online that he is only focused on taking the prison into a new era of accountability while operating to meet international codes of conduct.

His comments were in response to the claims of prison wardens who spoke to Eyewitness News late last year on the condition of anonymity, following a “Sentenced to Suffer” documentary that aired on Eyewitness News.

The wardens alleged that corruption at the prison was rampant during Murphy’s 8-month tenure as acting prison commissioner.

Prison wardens also alleged that corruption was eating away at the core of that facility and that upper management had employed scare tactics to prevent them from speaking out publicly.

In his new post as Commissioner of Corrections, Murphy responded directly to those assertions on Monday and refuted such allegations.

“No, those things are not happening here,” Murphy asserted.

After setting the record straight on that matter, Murphy quickly noted that he will not spend his tenure giving any focus to critics who purport any misconduct under his leadership.

“I do not pay attention to sidebars,” he said.

“I am focused and have a job to do.

“The Bahamian people hired me to do a job. There will always be detractors but I do not take time to answer them.”

Murphy continued, “My task is too great and important to waste time rebutting or answering them.”

The commissioner of corrections said he is ready and prepared to move the correctional facility into a new era.

“As I assume the helm of leadership, and as we transition from a penal to a correctional facility, I pledge that I will do my best to fulfill the mandate of the organization which is to rehabilitate and successfully reintegrate those persons who are entrusted in our care into society.

“Further, I will seek to foster a cordial, cohesive and professional environment which will be undergirded by discipline, the rule of law and fairness. You can be assured that no form of corruption will be tolerated during my leadership.”

Murphy assumes his new role with 38 years of experience under his belt.

He has replaced Patrick Wright, former Commissioner of Corrections.

Murphy has worked his way up the ranks at the BDCS.

He began his career at the then, Her Majesty’s Prison (HMP), in 1980 and was awarded the coveted Baton of Honour as the Most Outstanding Recruit in his squad.

His career steadily progressed from Corporal in 1993 to Acting Commissioner in 2018.

Murphy is the second person to hold the office of Commissioner of Corrections since the facility began its transition from a penal to a correctional facility.