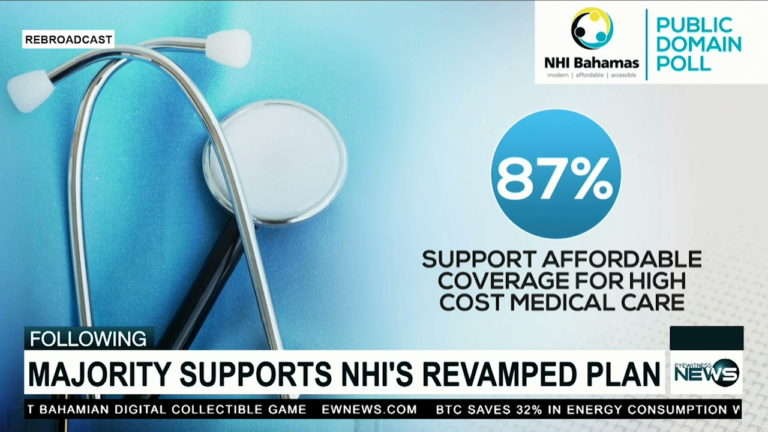 NASSAU, BAHAMAS – A public opinion poll recently conducted by Public Domain has revealed that 87 per cent  of respondents support the expansion of National Health Insurance (NHI) Bahamas to provide affordable coverage for high-cost medical care, such as treatment for prevalent adult cancers and paediatric cancers, heart attack and dialysis with no co-pays or deductibles.

“In addition, more than half – 57 per cent – of respondents said a combination of government, employees and employers should pay for universal healthcare,” outlined a statement issued Monday from the National Health Insurance Authority.

“This was higher among NHI beneficiaries, of which 65 per cent of respondents said a combination of government, employees and employers should pay.”

The poll, which was conducted by Public Domain between February 6th-18th, was completed by 1,043 residents throughout The Bahamas.

With regards to the National Health Insurance Authority’s policy proposal, the Authority said over three-quarters (78 per cent) of respondents support the proposal for NHI, which will ensure all Bahamians get access to a standard package of health benefits, including primary care, coverage for major cancers, dialysis and heart attacks.

Other notable results of the poll showed that:

Dr. Robin Roberts, Chairman of the NHIA Board said over the past few months, the NHIA has met with hundreds of Bahamians who have expressed their support for the new direction of NHI Bahamas.

“Time and time again, we’ve heard stories of Bahamians who have avoided getting treatment for illness due to high costs which has led to devastating outcomes. Now we have an opportunity to improve access to affordable, quality healthcare services for all Bahamians,” Dr. Roberts said.

“The overwhelming support gathered through this latest poll further demonstrates the need for NHI and shows us that we are on the right path towards achieving universal healthcare in The Bahamas.”

There are nearly 50,000 beneficiaries currently enrolled in NHI Bahamas, according to the NHI Authority.

The public consultation paper for NHI Bahamas, which takes into account the feedback received during the consultation period, outlines policy changes that have been incorporated into the final policy proposal which is being submitted to Cabinet for consideration.