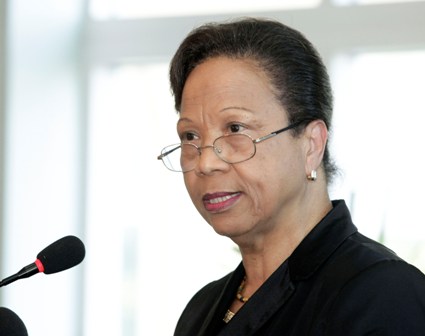 Retired president of the Court of Appeal (COA) Anita Allen has been appointed the new Law Reform & Revision Commissioner for The Bahamas.

Attorney General Carl Bethel made the announcement Monday, noting that all laws emanating from government will be reviewed by the commissioner.

“The Commissioner will have responsibility for not only bringing the laws further up to date – hopefully to the end of 2017 – but will also be the judicial hand which, with the assistance of the excellent draftspersons, managed by the Director of the Law Reform Commission, will steer the course of law reform,” said Bethel, pointing out that the commissioner’s contract is for two years.

The issue of land reform in the country, Bethel said, has plagued The Bahamas since emancipation.

“Far too many tracts of land, particularly in our Family Islands, have no legal title, or are subject to ancestral claims, which are unsupported by the ability to show descent to the claimants through birth in marriage,” he said.

Bethel said the government intends to draft bills and then publish a white paper, to form the basis for a thorough reform of the Law of Property.

The paper will also allow for the creation of a Land Registry, as well as the formation of a Land Commission to travel to every major island to document, mark and resolve all generational lands claimed.

Once the reforms are completed and all private and crown land is documented and registered, Bethel said, it will eventually be possible to identify who owns or claims any right, title, charge or interest, in any land anywhere in The Bahamas.

He said he anticipates that simplified forms of conveyancing documents will be prescribed by the law and the costs associated with land purchases, as well as the uncertainty – which has led to so much pain and suffering caused to ordinary people in places such as Bozine Town and Lynden Pindling Estates, will soon be greatly reduced.