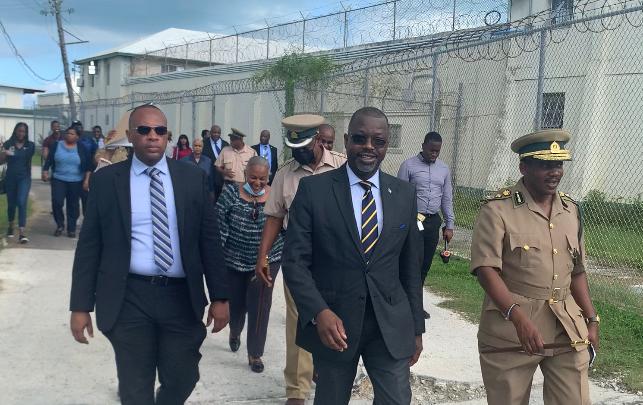 Minister of National Security Wayne Munroe (center) and Acting Commissioner Doan Clare toured recent upgrades and renovations at the Bahamas Department of Corrections with officials and members of the press.

NASSAU, BAHAMAS — Millions of dollars are expected to be spent on upgrades for the Bahamas Department of Correctional Services (BDOCS) facility which is undergoing a major facelift as it moves toward accreditation.

The American Correctional Association (ACA) conducted an assessment report which pointed out deficiencies in the prison and recommended incremental upgrades.

Officials plan to break ground on the new high-medium facility on January 15, 2023.

However BDOCS Acting Commissioner, Doan Cleare stated that they cannot give an official estimate on the dollar amount because they expect that they will need additional funds to finish the project.

Cleare further explained that they have only recently acquired the report, and have begun the first stages of renovations utilizing prison staff and inmates.

“Myself and the ministry knew firsthand that it would be an expensive exercise for us to undertake but again it must be done so we took it upon ourselves here at the prison with the inmates’ labour and with staff to commence the renovations without assistance from the central government thus far,” he said.

“But we are now reaching a stage whereby now we now have to tap into the capital budget to go further because you are now getting into the expensive part now which is the plumbing and the lighting.”

The new high-medium facility will be able to accommodate 820 residents, according to the BDOCS Acting Commissioner, and so far about $80,000 has been spent on the renovations for the remand centre , however, they expect to spend over $1 million on the plumbing which officials say will require special, resistant materials.

As they factor out costs, Cleare explained that the prison toilets could cost up to $2,000 each and approximately 80 are needed for the new high-medium facility.

Renovations are also being made to the remand center where upgrades on the steel bars and fixed appliances are being made to prevent inmates from stashing contraband, the Acting Commissioner said that banned items are still an issue, with over 400 cellphones confiscated so far for the year.

Munroe said that they are also in the process of building a remand court on the premises to avoid the inconvenience of having to drive buses of prisoners up and down for simple sentencing.

“We will trust that the remand court can accommodate some simple trials particularly in the family islands we have phenomena that people are transported to Grand Bahama, say, Abaco, Eleuthera, just to be told we’ll deal with you in another week in another month or two.

“It’s a wasted trip, its wasted manpower, and its wasted resources, the virtual court will accommodate that as well and realize cost savings quite apart from the logistics of moving inmates around the Commonwealth of the Bahamas.

“[…] there’ll be two estimated costs, one for the high medium prison and one for the virtual court.”

Minister of National Security, Wayne Munroe said that one of the items on the list is the juvenile housing facility which is nearing completion and expected to be functional by December 16.

The structure will be separate from the main facility, able to house 25 inmates at a time and schooling will be provided by ACA-trained individuals. Munroe said that the move is a step forward and in line with the Prime Minister’s prevention and rehabilitation plan.

“The stressing on rehabilitation is for an obvious reason. The statistics show that 98% of the residents of this correctional facility will be released back to the public.

“It is therefore important that we pay attention to rehabilitating them, as the name says, correcting their way of thinking and behavior before we release them back to society if we hope to have a positive impact on how they will move forward once they are released,” he said.

Cleare added that they have done massive remodeling in the 40-year-old juvenile facility.

“We have spent well over $100 thousand of remodeling thus far,” he said.

“The inmates are doing to work along with officers and this facility can house comfortably 25 inmates our juvenile population normally houses around 14 or 15 inmates per year.”

You dont know how much it will cost but you sure do know you need more money, lord these men are ridiculous, over priced upgrades and remodeling which should have been done 10-15 years ago, why so much focus on it now? High gas prices, high electric bill, high food cost, low employment rate but the discussion is prison mybad corrections department services, clown world bahamas.