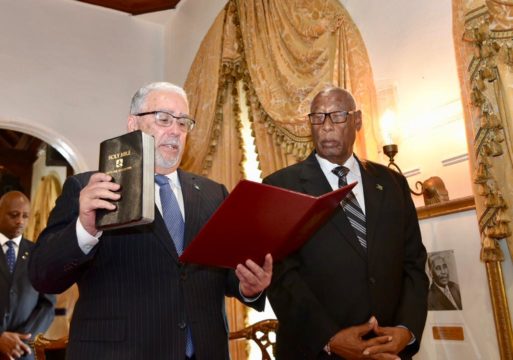 Mr. Brian M. Moree, QC, was sworn in as Chief Justice of the Commonwealth of The Bahamas on June 12, 2019 at Government House. Mr. Moree is pictured, left, being sworn in by Deputy to the Governor General, C.A. Smith. (BIS Photo/Yontalay Bowe).

NASSAU, BAHAMAS – The country’s newest Chief Justice, sworn in at Government House on Wednesday afternoon, said he intends to bring sweeping changes to the judicial system which has been experiencing various setbacks for a number of years.

He was sworn in as the country’s 13thsubstantive Chief Justice.

Moree assumed his new post with immediate effect, which relived Vera Watkins from her temporary post as Acting Chief Justice.

Isaacs had been appointed to the position after it was vacant for two years and only spent two weeks in office before he passed away due to health complications.

The new chief justice spoke briefly with media after his appointment on Wednesday afternoon.

Moree said he counts it a privilege to have the opportunity to serve in a position which will allow him to contribute to the ongoing development of the country’s judicial system.

According to Moree, there are a list of short term issues that he expects to address within the coming months.

Topping that list are delays and the backlog in the judicial system due to a high volume case load, Moree said.

“We’ve got to see if we can get an allocation of national resources which is consistent with the status of the judiciary under the constitution,” he said. “We do need major reforms and changes and we intend to address these challenges very directly in the short-term.

“I don’t think it will be business as usual. We have an agenda of items and will see if we can implement changes and will be working with all stakeholders who are involved in the administration of justice to see if we can make substantive changes to improve the way we are conducting business currently.”

Along with addressing the manpower needs of the judicial system, the new chief justice confirmed that addressing various public registries and reform in the magistrate’s court will be next on his agenda.

“We are going to have to address that certainly within the first several months moving forward and hopefully introduce changes to make it more efficient and convenient for the public,” he said.

“It will also help us with case management as we also sort out how we will move all the files, papers, processes and protocols.

“The magistrates’ courts are also in need of major reforms so we will be speaking with the Chief Magistrate and her colleagues to see what we can do in the short-term.”