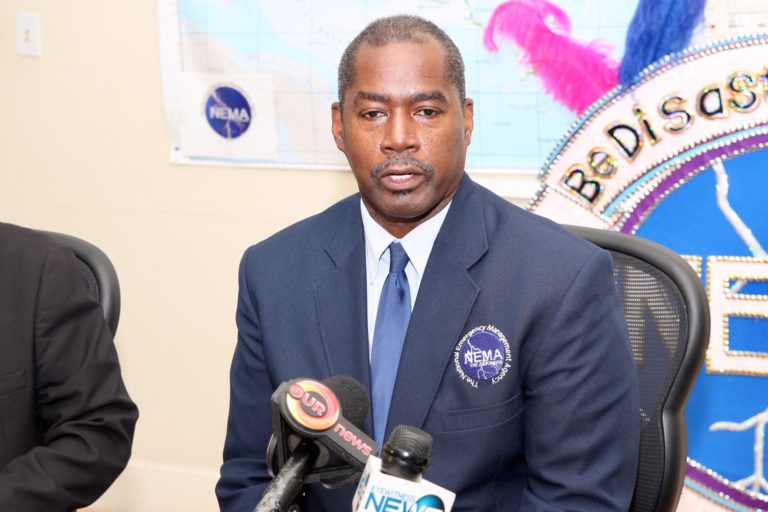 The National Emergency Management Agency, NEMA, has as its theme: “Be Prepared Bahamas” for the 2019 Atlantic Hurricane Season. A press conference was held Friday, May 31 at NEMA on Gladstone Road ahead of the season. Pictured is NEMA Director Captain Stephen Russell.

NASSAU, BAHAMAS – The National Emergency Management Agency, NEMA, has as its theme: “Be Prepared Bahamas” for the 2019 Atlantic Hurricane Season.

The season runs June 1 to November 30. However a Subtropical Atlantic Storm Andrea has already form, making 2019 the fifth consecutive year to have a named storm outside of the Atlantic Hurricane Season.

In this vein, Director of NEMA Captain Stephen Russell is reminding The Bahamas about three consecutive hurricanes: Joaquin in 2015, Matthew in 2016 and Irma in 2017 all category 3 storms, which left millions in destruction.

“As we are acutely aware, Hurricane Season is once again upon us. We must always be mindful that all potential impacts of a disaster should not be taken lightly,” Capt Russell said during a pre-hurricane season press conference on Friday, May 31 at NEMA on Gladstone Road.

The National Oceanic and Atmospheric Administration (NOAA) is predicting a “near-normal” hurricane season in 2019, with between two and four major hurricanes expected.

NEMA has set aside the entire month of June as preparedness month. Some of the activities include: