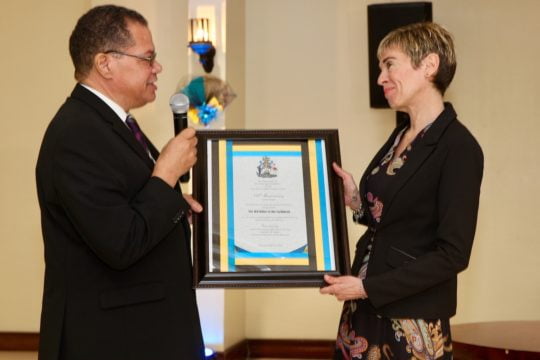 NASSAU, BAHAMAS – The Ministry of Labour, The Social Partners, The ILO Decent Work Team and Office of the Caribbean Mission IV partnered to conduct a two-day symposium to celebrate the 100th Anniversary of the International Labour Organization’s existence.  A ceremony was held to officially open the event at the National Training Agency, May 27, 2019.

Minister of Labour, Senator the Hon. Dion A. Foulkes delivered the keynote address. He pledged the government’s continued support of the ILO and said that since joining the organization in l976, the country has benefited from its partnership with the organization.

“As an active member of the ILO, The Bahamas over the forty-three years, has benefited significantly from adopting various conventions and recommendations of the ILO and enshrining the same into our Statute laws,” said Senator Foulkes.  “I hasten to add that The Bahamas has ratified all eight of the ILO Core Conventions and implemented a significant number of recommendations in our country’s laws, regulations and policies.”

ILO Regional Director, Ms. Claudia Coenjaerts, commended The Bahamas for its progress in labour relations and said that although many strides have been taken to ensure that all stakeholders are being treated fairly, there is still much more work to be done. She said that with the world’s population decreasing, future generations would be burdened with a smaller labour force placing a strain on them economically.  In addition, she said that research is showing that as a result of wages not rising significantly to meet some of the economic challenges, poverty levels are increasing globally.  For these reasons, she believes that the ILO must continue to push to meet these future challenges.

“The need for wealth distribution is undeniable,” said Ms. Coenjaerts. “Since my visit to The Bahamas, my initial thoughts and observations is that a lot is going on in the country. There is a need for job creation in order to counter youth unemployment and facilitation of partnerships will be key in assisting the country is advancement.”

Topics that will be discussed during the symposium include: ‘The Future of Work – The Bahamas Perspective’; ‘Role of Work in the Bahamian Society’ and ‘The ILO’s Global Commission & the Future of Work.’

This article was written by Betty Vedrine – Bahamas Information Services.